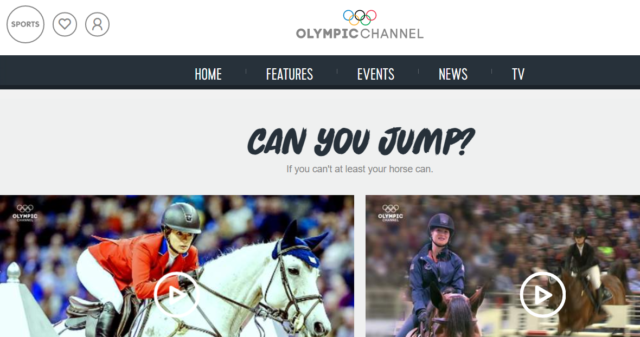 Lorraine Jackson brings us the scoop on this channel featuring some of the lesser-known Olympic sports that don’t get a lot of mainstream coverage — sound familiar? In conjunction with the Rio Olympic Summer Games in 2016, the International Olympic Committee announced that they were starting their own independent media venture, with the intention of giving fans more opportunities to follow Olympic sports year-round and in-between Olympics.

In particular, they wanted to highlight the sports that don’t always get coverage on ESPN or on the cover of Sports Illustrated.

Partnering with the FEI, The Olympic Channel has created a media universe just for elite show jumping, and has been putting together some really great snippets, interviews and updates on all three of the Olympic equestrian disciplines, including interviews with Jamie Barge, Jenni McCallister, Jennifer Gates (Bill Gates’s daughter) and more.

For the uninitiated, they have video guides to each of the disciplines, and they include equestrian features in their original series on the channel.

Because of their strict copyrighting licenses, we can’t bring any clips directly onto our site, but we highly recommend popping over to the Olympic channel and checking it out there directly.

You can make a profile and save your favorite sports to your profile to get catered content (equestrian or otherwise – Heaven knows I need my Lochte/Phelps fix on the regular, too.) and sign up for weekly emails.

Link to the Olympic Channel