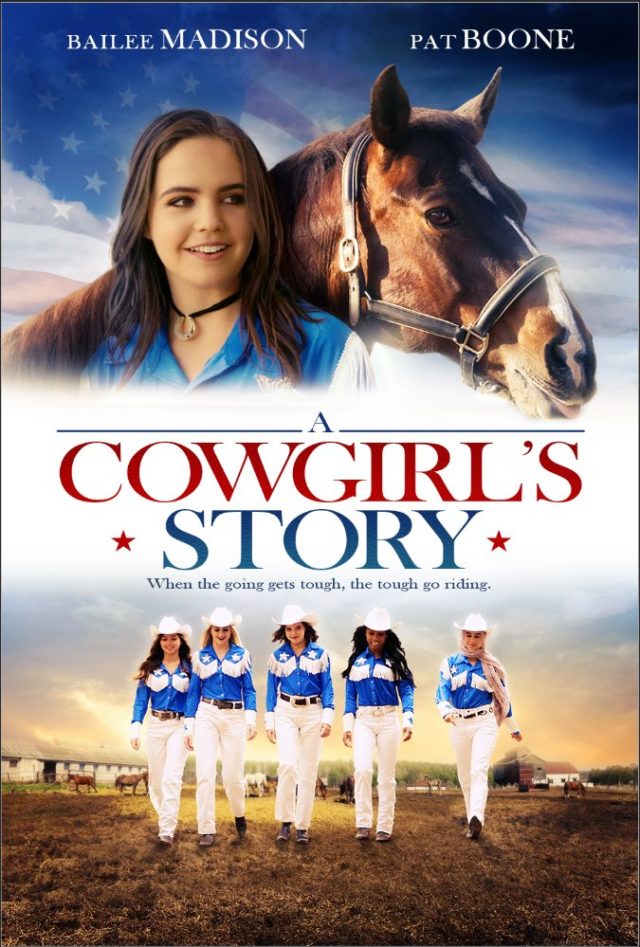 A Cowgirl’s Story, coming to DVD on April 18th, features Bailee Maddison as 17-year-old Dusty Rhodes, who has gone to live with her grandfather (Pat Boone) while her parents are fighting in Afghanistan. Dusty struggles being the new kid at school, but manages to befriend a group of “troublemakers” led by a girl named Savanah (Chloe Lukasiak) by taking the blame when they’re caught with alcohol on school premises. With her new group of friends, Dusty creates an equestrian drill team to perform at local rodeos.

Dusty is then rocked by the news that her mother’s helicopter has been shot down and in order to cope, focuses her energy on putting together a special drill performance to honor her parents and other soldiers fighting overseas.

I feel like I need to preface my opinion of this movie by saying that if you were create an algorithm to tailor a movie specifically to the taste of someone like me (a nerdy, cynical dressage rider with a penchant for sarcasm), what you would get would probably be the exact opposite of A Cowgirl’s Story. I am not the target audience for this film, and I tried to keep that in mind while watching.

A Cowgirl’s Story is shockingly ambitious for a straight to DVD release, and I think its ambitious approach is what ultimately leads to its undoing. The number of subplots, from the expected drama with Dusty’s love interest, to the less expected confrontation of Islamaphobia directed at one of the drill team members, to the financial struggles Savanah and her single mother face, make each point the movie is trying to touch on feel a bit watered down.

I think by focusing on one or two plot points instead of five or six, the movie could have had much more impact. While I commend the creators for attempting to tackle such difficult subject matter, the neat and quick resolution of conflict stemming from incredibly complex issues can feel dismissive at times.

Because of the numerous subplots, little time is actually spent with the horses, so they fail to come alive as meaningful characters within the film. It seems less of a horse movie, and more a teen drama that happens to have some horses in it. If that’s what you’re looking for, the acting and the production of A Cowgirl’s Story are good enough to get the job done, but if you’re looking for some satisfyingly sappy horsey comfort food, I’d stick with Heartland.

My rating for A Cowgirl’s Story is two out five of carrots.