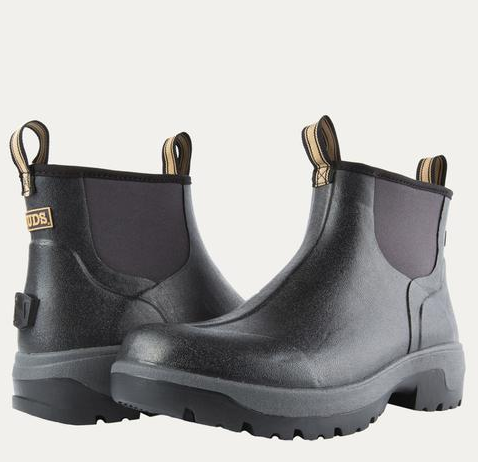 Male equestrians, this one’s for you.

No matter how much we try to deny it, pretty much any horse farm in the world includes its fair share of mud. I don’t care if you have the best-draining pastures in the world and about two inches of rainfall annually — if you have horses, you have mud.

That’s why waterproof work boots are generally viewed as essential footwear for anyone who spends any time around farms at all: from snow season to mud season and everything in between, keeping your feet dry is essential not only for your comfort but for your mental state as well.

Typically, we picture knee-high boots, perhaps topped with neoprene, when we think of waterproof work boots — which was why my husband Erik was initially fairly skeptical of the Noble Outfitter MUDS in six-inch height. However, after wearing them around the farm as well as plenty of other applications, he’s become a fan.

One big advantage did turn out to be the height: with a shorter boot just waterproofing the foot, “my calves didn’t get all sweaty,” Erik stated. That’s a great bonus for working around the farm as the weather gets warmer — the mud doesn’t go away, but no one necessarily wants to be tromping around in calf-height boots when it’s in the sixties or warmer.

Erik wore these around the farm for a number of chores, including walking out into our various pastures to check fencelines as the snow retreated. “I wouldn’t wear these into deep mud,” he warned, having an incident in which he did wind up in a puddle much deeper than his boots were tall. “But I did hike through wet pastures and cross a shallow creek and the MUDS were great. They’re pretty comfortable for lots of walking.”

Off the farm, Erik likes the MUDS as a slip-on boot to get him out the door on wet or snowy days — the short height both makes them easy to take on and off quickly and also means he can get a waterproof boot in foul weather without shoving the legs of his suit pants into tall boots. The MUDS are also useful for quick trips outside and yard chores.

Overall, the big selling points for Erik were the waterproof qualities, the easy on/off and the height, for certain applications. He did not find the boot practical for deep muddy scenarios, nor would he recommend the MUDS as a hiking boot for more than a mile or two around the farm. For their intended use as a comfortable, light chore boot, however, the MUDS have earned a place in our boot closet, and Erik would definitely look into the taller calf height as well.