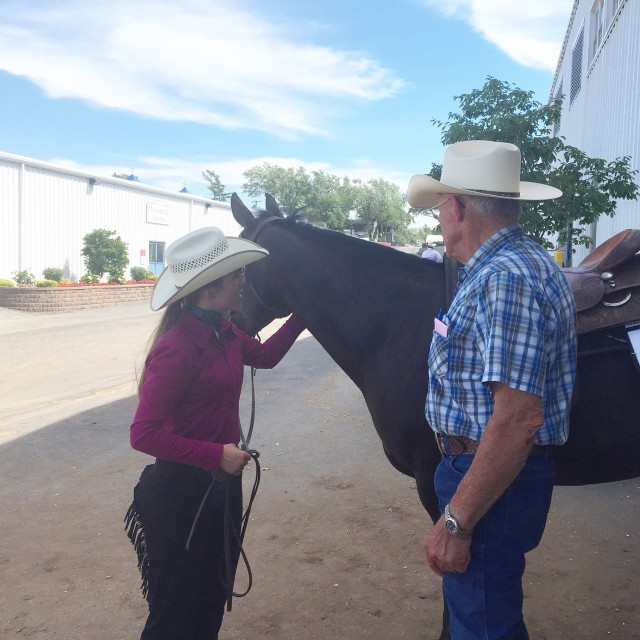 May you be lucky enough to know one.

“Every spring, a whistle blows and cowboys change wives,” says my coach Harry with a wink. More often than not, he tells this story within earshot of his wife Alice, who rolls her eyes (unconvincingly, since she’s also smiling). “The only reason I’m still with Alice is because I’m too old to hear it anymore.”

This is the man behind the racing turtle/hat can airport story, the head coach of my western intercollegiate team, and who I want to be when I grow up. Few people have the ability to make whatever they’re doing fun, whether it’s at 6 AM on a Monday for reining practice, during a team dinner, or at a stressful horse show — he’s always thinking of some way or another to cause a little trouble. He knows all the old cowboy tricks, has a repertoire of fancy rope knots, funnel pranks, the infamous dogjaw (I can’t tell you about this one, you’ll have to ask him yourself), the water bottle-and-penny joke, and even that super funny trick where he waits until some poor unsuspecting girl (me, for example) has gone into a hot porta-potty at a show and then clips a bucket snap to the outside of the door.

He can throw a rope, sell a chicken to a person who’s hard of hearing (don’t ask), and outsmart our entire team with ease. Nothing gets by the brim of the cowboy hat he always wears (tan, of course, because he’s a “good guy”). With a little wheedling, he dresses up as the Grinch (still wearing a cowboy hat and Wranglers, naturally, just spray-paint-dyed green), and growls just as convincingly.

Horse showing, with its requirement of not-fun things like chaps and pattern memorization, would not be nearly as fulfilling if not for the hours spent ringside with Harry, doing my best to absorb all the things he points out — a slightly too-quick hand that led to an ugly lead change, a perfectly-positioned leg to achieve a smooth ninety-degree pivot, an interesting arrangement of polos and skid boots on a reining horse — interspersed with more than seventy-five years’ worth of stories of racing and training horses, of road trips that must have crisscrossed the country in millions of miles of dually tracks, of dogs and horses and houses and wives he’s had over the years. Once, he said I rode like him, and that’s probably the moment that I peaked in my riding career.

The opportunity to learn from a coach who is an expert on both riding and having fun has been one of the most valuable components of my college career. Retaining a competitive spirit, riding to win (instead of riding to not lose), keeping a sense of humor, dealing with adversity by learning to laugh at yourself and bad situations instead of dwelling on the negative — these are all skills I hope I never lose, and ones that will not only make me more like Harry, but help me in every situation I’ll encounter in life, in my future career and in horse showing.