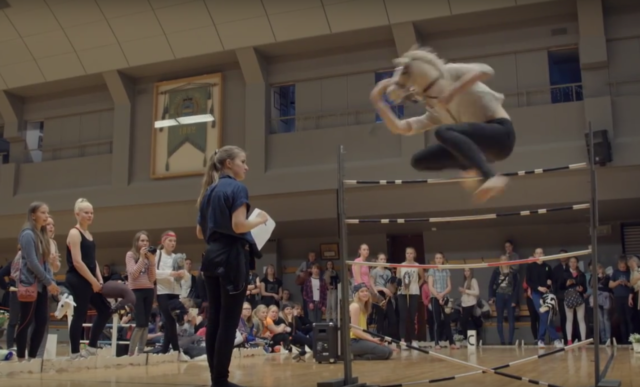 This Scandinavian craze is going viral all over social media, often garnering plenty of mockery. Kristen Kovatch points out a few reasons that we shouldn’t be so quick to judge.

You may have seen this viral video going around. Actually, you may have had it shared to your Wall… probably about a hundred times:

The captions include statements such as “no, this isn’t an April Fools prank” and the commentators crack themselves up as they watch. As usual, comments by viewers range from mild mockery to straight-up eye rolling: “Did all of their real horses die at once?” “What’s next, competitive Barbie tea parties?”

Yeah, yeah, I get it — watching people (okay, mostly teenage girls in Scandinavia, especially Finland, where competitive hobbyhorse is a serious pursuit) run around with a stick horse balanced between their knees, tackling their over-fences class very seriously and practicing the perfect passage looks pretty funny at a glance. Some of us might think fondly back to our youth, hours spent playing “horseless horse show” while we waited for the dream day when we’d get to ride a real horse or call one our own. To most observers, competitive hobbyhorse just looks like an awkward phase for weird horse-obsessed kids until they find a “real” competitive sport.

But watch this trailer for the upcoming documentary Hobbyhorse Revolution and see if you feel the same way:

Let’s break down the benefits these young people are getting out of competitive hobbyhorse:

Does this sound familiar? These are many of the same benefits that we experience from horseback riding. For individuals without the economic means, geographic location or ability to learn to ride, competitive hobbyhorsing allows them to live their equestrian dreams and celebrate accomplishments even if real riding might never be within their grasp.

We’re particualrly moved by Aisku in the above trailer — she can see that her friend and student Nelly needs inspiration to find her own self-confidence, encouragement to believe in herself. “I’m trying to bring out what’s good in her, so she can see it too.” Another character Elsa discloses that her parents divorced in 2006, and all she remembers from the five years immediately following is hobbyhorsing with her friend Roosa.

Much like horseback riding, hobbyhorsing is helping young people build their own confidence, find their niche and their community and experience important life skills like goal-setting and teamwork. How can anyone make fun of that?

We’re keeping an eye on the Hobbyhorse Revolution project, which is supposed to completed this year. In the meantime, go riding — however you like.