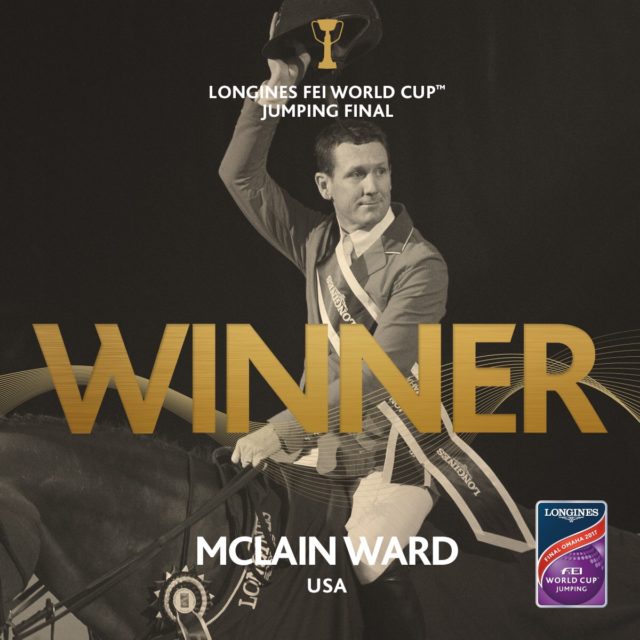 The final day of show jumping consisted of two rounds: twenty-six competitors headed into the third round of the weekend, with only the top twenty to qualify for the final round. Rails were counted cumulatively for the entire competition.

Heading into round 3, there was no real shoe-in to win the entire competition (though clearly McLain Ward was a favorite). There were, however, many riders that knew they had no chance — but nonetheless, for the experience and the honor of riding in a World Cup, they gave it their all nonetheless. The first double-clear went to Italy’s Lorenzo de Luca and Ensor de Litrange, followed soon after by France’s Kevin Staut and Reveur de Hurtebise — a gold medal-winning combination from Rio last summer. These combinations held the overall lead and round lead into the drag, with 16 cumulative faults apiece.

Simon Delestre of France and Chadino started off the second half in great style with a double-clear. Maikel Van der Vleuten of the Netherlands also accomplished a double clear aboard VDL Groep Verdi, followed by teammate Leopold Van Asten and VDL Groep Zidane, putting pressure on the top pack.

Into the top ten, the pressure grew with every clear round: Spain’s Sergio Alvarez Moya and Arrayan finished clear, keeping them in the hunt for the World Cup win. Sweden’s Henrik von Eckermann and Mary Lou took the lead on eight cumulative penalties. Switzerland’s Romain Duguet and Twentytwo des Biches, perhaps one of the sleepers of this entire World Cup, finished clear, just one rail off of McLain Ward.

With tension filling the coliseum, McLain Ward and the outstanding HH Azur finished a third double clear round. As the pair landed off the final fence, the entire building erupted with cheers.

The top eight standings heading into the final round:

The final round was a true World Cup-caliber challenge — massive oxers, tricky verticals and impressive combinations. By this time in the competition, fitness becomes a consideration for horse and rider pairs.

To the delight of the home crowd, the first clear round was by the only female rider in the final round, USA’s Laura Kraut and Zeremonie, who certainly rode to redeem a perhaps slightly disappointing World Cup in earlier rounds. Three-time World Cup winner Marcus Ehning of Germany and Pret a Tout also finished clear to take the lead.

Italy’s Lorenzo de Luca, an up-and-coming international star, put in his second double-clear of the day in a particularly exciting round to take over the lead; Kevin Staut of France immediately followed suit to share the lead for this round. These were the last clears of the first half before the drag.

Maikel Van der Vleuten started off the top ten with a double clear, finishing on his twelve faults to keep the pressure on. Steve Guerdat, defending champion aboard the fiery mare Bianca, ended his World Cup on his terms with a wickedly-fast double clear. The youngest rider in the World Cup, 21-year-old Guido Klatte of Germany finished on 11 faults with an incredible, inspiring campaign to take a brief lead.

Then Sergio Alvarez Moya of Spain seemingly surprised even himself, jumping clear for a total of 9 penalties to take over the lead; Martin Fuchs finished a brilliant clear to share the lead. Henrik von Eckermann followed with a double clear himself, taking over the first position with podium hopes — which were confirmed when Gregory Wathelet tragically dropped a rail. Romain Duguet rode under a tensely silent coliseum to put in a superb double clear with Twentytwo des Biches, raising cheers from all spectators.

To borrow a cliched phrase, you could hear a pin drop as McLain Ward and HH Azur began their final round — but every rail stayed in its cups and as “Annie” soared over the final oxer Omaha erupted into cheers. McLain Ward and HH Azur had won the FEI World Cup Finals — the first American to win in the US since 1980. This pair went clear in every single round in Omaha: they left every jump standing in their wake.

Fun fact: the top three horses were all mares. #girlpower

Thank you to course designer Alan Wade & his incredible team! Building these courses takes a lot of work #FEIWorldCupFinals pic.twitter.com/VC0NyGlvsv

Wonder how wide the #FEIworldcupfinals oxer at #8 is? 1.70 meters! As Peter Leone shows, it's wide.

Isn't this a pretty jump? There's a display in the arena exhibition area with smaller versions of the big jumps in the ring. #FEIWorldCupFinals #horsesofinstagram #showjumping #equestrian

Sleep can wait, I need to continue watch #FEIWorldCupFinals and see who wins!

You can tell Charlie has extensive experience w the credential photo. #FEIWorldCupFinals pic.twitter.com/obXwVzAAgb

He did it! After 17 attempts McLain Ward is the @LonginesEq FEI World Cup Jumping Champion with HH Azur!!!! #FEIWorldCupFinals pic.twitter.com/84xaV00Lcu