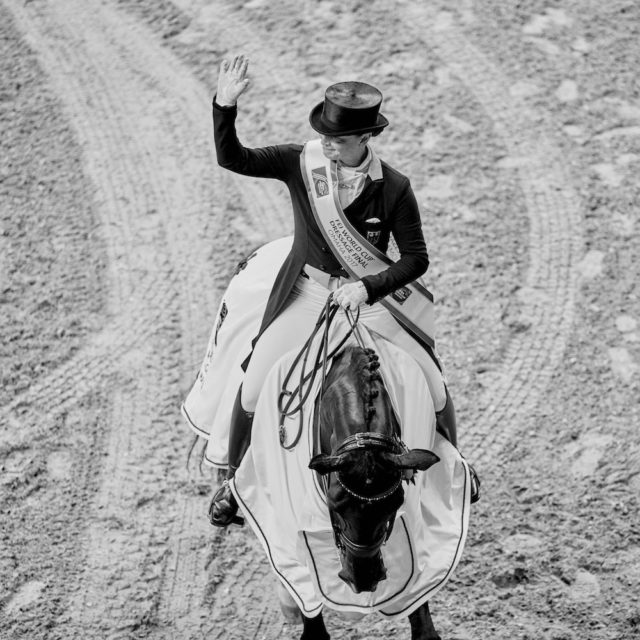 They came, they danced, they conquered.

World Cup show jumpers get the day off — if they so choose. Some of the World Cup riders are cross-entered into the International Omaha Jumping Grand Prix, with some riding their World Cup mount and others on a second horse.

Dressage, however, took the spotlight today: fourteen combinations danced their way across the coliseum floor, delighting the spectators with musical freestyle rides. Our own Morgane Schmidt Gabriel provided plenty of color commentary over Twitter as the lead shifted from rider to rider.

After the first half, the lead was held by the Netherlands’ Madeleine Witte-Vrees and Cennin with a 79.046%, but the home crowd was rapt as Laura Graves and Verdades, second place after the first round of competition, performed a challenging test featuring maneuvers such as 2-stride changes on a circle. Graves marked an 85.289%, which stood through performances by Carl Hester, Edward Gal and Judy Reynolds.

However, no one could best the best in the world — Isabell Werth, the Day 1 leader, aboard Weihegold OLD, broke into the 90s to mark a 90.704%, making Werth the unquestionable FEI World Cup Finals dressage winner.

Scores from the top five:

@OllieW – Steffen Peters has just given us our first Phil Collins of the evening in the Freestyle! #FEIWorldCupFinals pic.twitter.com/pkVyhRZy1H

We’ll be back tomorrow with the final round-up from the FEI World Cup Finals in Omaha! Go riding.