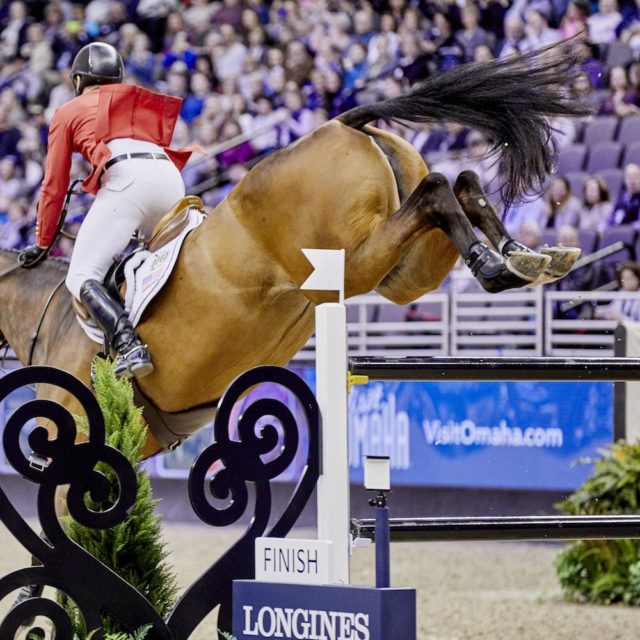 Dressage combinations got the day off to rest and prepare mentally and physically for tomorrow’s freestyle competition, after which the World Cup winner will be named. Isabel Werth of Germany currently sits first, followed by USA’s own Laura Graves and Great Britain’s Carl Hester to round out the top three.

Instead, a dressage showcase took center stage: a presentation by Isabel Werth, western dressage and para-dressage. Our own Morgane Schmidt Gabriel was on hand to observe:

Morgane also may have done a bit of shopping…

We suspect someone’s check bag will be a little heavier on the way home.

Tonight’s second round was a Grand Prix, which George Morris again described on course walk:

Combinations performed in reverse order of ranking, making for a true nail-biter. The course with plenty of massive oxers and sweeping lines proved difficult early on, but a great home Omaha crowd cheered every rider home regardless of country of origin. The top 30 of this second round will qualify for Sunday’s grand prix to name the winner.

It took until the eighth trip to see a clear — Keean White of Canada aboard For Freedom didn’t drop a single rail, though just outside the time allowed. Italy’s Lorenzo de Luca followed shortly, thrilling the spectators with another clear plus one time penalty. Ireland’s Dennis Lynch also finished clear, a second and a half out of time — despite an adjusted time allowed after the first trips. These were the only clean rounds in the first half; Nayel Nassar of Egypt chose to retire Lordan after a big rail down.

Kicking off the second half, Maikel Van der Vleuten and VDL Groep Verdi Tn N.O.P. of the Netherlands edged out a clear round with time penalty — but immediately following, the three-time World Cup Finals winning Marcus Ehning of Germany on Pret A Tout proved that the course could be ridden clean AND within time, setting the first double-clear of the night.

The second double-clear we may not have seen coming — Germany’s Guido Klatte, the youngest rider at age 21, put in another scrappy round aboard Qinghai, thrilling the crowd with every fence. Martin Fuchs soon followed suit aboard Clooney with Romain Duguet and Twentytwo des Biches on their heels, making for a double German/double Swiss jump-off. Rookie Gregory Wathelet of Belgium and Forlap put in a double clear as we moved into the final four.

And Team USA’s hero of the FEI World Cup Finals, McLain War aboard HH Azur achieved another double clear to bring six riders into the jump off.

In the jump-off round, Marcus Ehning started us off, but dropped two rails on the tall verticals. Guido Klatte tried to make a daring turn and perhaps caught his horse by surprise, sliding into an oxer as well as dropping an additional rail on course. Martin Fuchs, however, put in a brilliant clear to take the lead, followed by his fellow Swiss Romain Duguet who took it for himself.

For a moment, rookie Gregory Wathelet had the lead after a fast, clear round… but McLain Ward and HH Azur proved themselves the best of the best again. (As an aside, both myself and my non-show-jumping-fan husband were chanting “MCLAIN! MCLAIN!” for most of the jump-off.)

For a round-by-round recap, take a look at the live thread at our sister site Jumper Nation.

Guess someone drew the short straw of the camera crew. We think he should be wearing a fern hat to complete the look! #FEIWorldCupFinals #omahaworldcup2017 #welcometothejungle

I have no words for Marcus. Just textbook and bold and forward. #FEIWorldCupFinals pic.twitter.com/EtI9vyXWn2

We’ll be back tomorrow with another round-up from the FEI World Cup Finals in Omaha! Go riding.