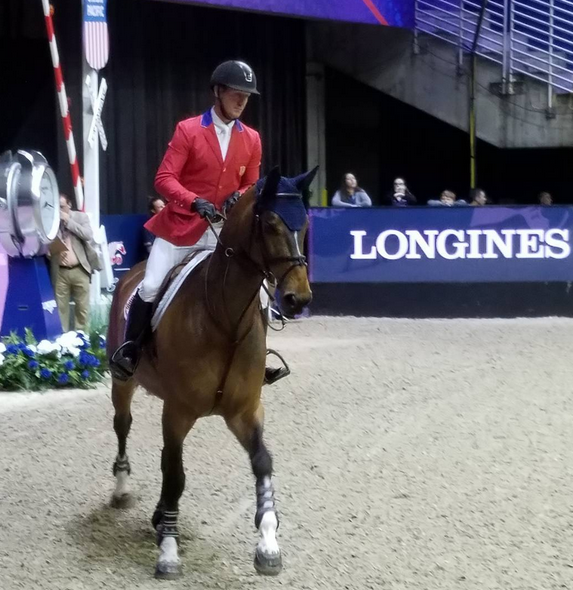 We’re bringing you all the news from Omaha!

Sixteen horse-and-rider combinations danced their way across the coliseum of the CenturyLink Center before a rapt crowd. Household dressage named Edward Gal of the Netherlands with Glock’s Voice took an early lead with a 74.471% provisional score, but Great Britain’s Carl Hester and the notoriously sensitive but talented Nip Tuck soon took over with a 77.80%. American riders Steffen Peters and Kasey Perry-Glass rode their way into the top eight, but it was Laura Graves and her own Verdades who would briefly become the new leaders with a 79.80%.

However, no one could best the final rider, Germany’s Isabel Werth, the season leader. She and Weihegold OLD laid down the first 80+ score of the World Cup Finals, marking 82.271%.

Here are the standings after the first round of dressage competition:

Really happy with my test tonight JP (Vancouver K) was fantastic! I'm absolutely delighted with how JP gave his all in the arena today. I'm very proud of our test. A top five finish at the @fei_global World Cup is a great result. Looking forward to the freestyle on Saturday #TeamIreland #teamhorseware #roecklequestrian #gaintheadvantage thank you @teamirleq #teamcounty #trmambassador #gojp

A challenging speed round course by Alan Wade saw many rails clatter to the floor in Omaha; however, as only the first round of three, many riders were likely riding conservatively for a qualifying score while saving horsepower. The first clear round of the night was achieved by Switzerland’s Martin Fuchs and the always-sexy Clooney 51. Other clear rounds came soon after by Sergio Alvarez Moya of Spain and Simon Delestre of France, but Leopold Van Alsten and VDL Zidane became the new leaders just before the halfway point.

The second half kicked off with a quiver of clears: Romain Duguet and Twentytwo des Biches launched the streak with a clear for second place, but the USA’s own McLain Ward shot right to the lead immediately after on the impeccable mare HH Azur, garnering a standing ovation from the home crowd. Germany’s Guido Jun. Klatte and Belgium’s Gregory Wathelet also finished clear immediately following Ward. Defending champion Steve Guerdat — who has won the past two World Cup Finals — aboard the brilliant Bianca put in a fast, clear round to take over second place… temporarily.

Sheikh Ali Al Thani and Carolina of Qatar — always a fun pair to watch and root for — put in a clear round for twelfth. Henrik von Eckermann of Sweden and Mary Lou put in a great round to take over second from Guerdat, overcoming a funky fall in their last outing back in Europe.

Other than McLain Ward, Team USA did not have the best rounds — one rail each for Charlie Jacobs and Laura Kraut, and multiple rails down for Jamie Barge, Todd Minikus, and Jenni McAllister. Audrey Coulter parted company with her mount, and Karl Cook retired.

Company coming over. I’ll apologize once for my house being untidy, but let’s be real, #OmahaWorldCup finals are on ?? #FEIWorldCupFinals

A post shared by Classic Communications (@classiccommunications) on Mar 30, 2017 at 6:33pm PDT

We’ll be back tomorrow with another round-up from the FEI World Cup Finals in Omaha! Go riding.