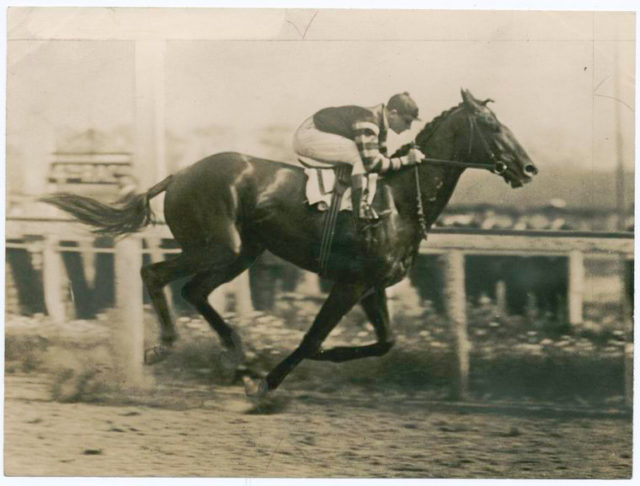 On this day 100 years ago, a legend was born: we retell the story of Man o’ War, one of the most influential horses to shape to Thoroughbred racing industry.

Every Thoroughbred born carries the hopes and dreams of his connections that he’ll be a winner. Every once in a while, we are graced with true champions — and even more rarely, we are touched by something truly magnificent, however humble he might look as a wobbly-legged foal finding his feet. Man o’ War was one of these rare creatures — a horse that became an icon, an inspiration and the foundation to a dynasty.

On this day 100 years ago, though, he was just a foal — royally bred, of course, but one of many. Sired by stakes winner Fair Play (a son of the wickedly fast and wickedly temperamental Hastings) out of a daughter of English Triple Crown winner Rock Sand, Man o’ War certainly had the pedigree of a champion, bred by August Belmont II. When Belmont became involved in World War I, he sold his entire 1917 foal crop; Man o’ War was purchased for the knockdown price of $5,000 (about $80,000 by today’s standards) by Samuel D. Riddle.

Having apparently inherited his grandsire’s temper, Man o’ War came into training with Hall of Fame trainer Louis Feustel with guns blazing, often launching his exercise riders and careening about the track solo. Feustel took his time training the colt, bringing him along slowly as he carefully tamed his temper. By June of 1919, Man o’ War was ready for a debut — and he made such a debut as to put him on the map early, absolutely trouncing the field in a maiden race at Belmont Park despite restraint by jockey Johnny Loftus.

The rest of Man o’ War’s juvenile season went much the same way, with multiple stakes victories marked by the horse easing under the wire, never truly running flat-out at the finish. Only one blemish ruined a perfect season, with a terrible start in the Sanford Memorial Stakes placing Man o’ War and Loftus in poor position. A colt coincidentally named Upset won over Man o’ War by half a length, having received a near-perfect ride as well as having carried 15 fewer pounds.

Despite this defeat, the horse was a celebrity — he traveled and was stabled with guards to prevent both souvenir hunters from plucking his mane and tail bald and from assassination attempts by jealous competitors. He captivated an entire nation, and his fame went all the way around the world.

Man o’ War did not compete in the complete 1920 Triple Crown in his three-year-old season — he skipped the Kentucky Derby, which at the time was only a few days before the Preakness Stakes. He did, however, win the Preakness as well as the Belmont Stakes, then continued a brilliant summer campaign setting track records at Saratoga that would stand for decades. The colt’s 100-length victory over Hoodwink in the Lawrence Realization at Belmont set a new world record for a mile and five-eighths; the record has never been beaten at Belmont.

Check out footage from the race:

Coming off of a 13-win streak, a match race was set up in Canada for the three-year-old Man o’ War to face off against 1919’s Triple Crown winner Sir Barton. In his usual fashion, Man o’ War set a new track record and beat Sir Barton by seven lengths, eased up before the end.

There was nothing left for Man o’ War to prove as a three-year-old — and owner Riddle knew that the colt would face massive weight assignments in four-year-old handicaps. Rather than break down his precious horse, Riddle made the decision to retire Man o’ War. The horse left the track with twenty wins in twenty-one career starts and set three world records, two American records and three track records. Many race descriptions state that the horse was eased up before the end or never asked to run, suggesting that we may not truly know just how fast Man o’ War was.

Not only was Man o’ War influential on the track, but he proved to be a foundation for the modern Thoroughbred as well. Despite a limited book of mares, Man o’ War sired 62 stakes winners from 381 started foals. His sons War Admiral (a Triple Crown winner) and War Relic went on to be sires themselves, with such modern-day stallions as Tiznow, Tourist and Honour and Glory, among others, carrying the line. His son Hardtack sired the well-loved Seabiscuit.

Man o’ War was never formally recognized as the top broodmare sire any year during his career, but his daughters produced horses of influence themselves. Famous names such as Kelso, Sword Dancer, Nijinksy, Buckpasser and Raise a Native all include Man o’ War through dam bloodlines. Man o’ War can be found in many modern Thoroughbred pedigrees, such as the most recent Triple Crown winner American Pharoah.

Man o’ War suffered a heart attack in 1943 and was retired from stud, and suffered what appeared to be another heart attack in 1947 and died. The horse’s death came less than a month after the death of his beloved groom Will Harbut, leading many to believe that perhaps Man o’ War died of a broken heart.

The horse’s funeral was attended by over 2,000, with numerous military honors in the United States and Japan to mark his passing. The funeral was broadcast live on the radio, and racetracks held a moment of silence in Man o’ War’s memory. He was buried at Faraway Farm, but was moved (along with his iconic statue) to the Kentucky Horse Park in the 1970s where thousands of fans pay their respects each year.

As Harbut described him, Man o’ War was “the mostest horse that ever was.”

Listen to the broadcast of Man o’ War’s funeral:

On this day, we recognize an American legend and remember the legacy of the great Man o’ War.