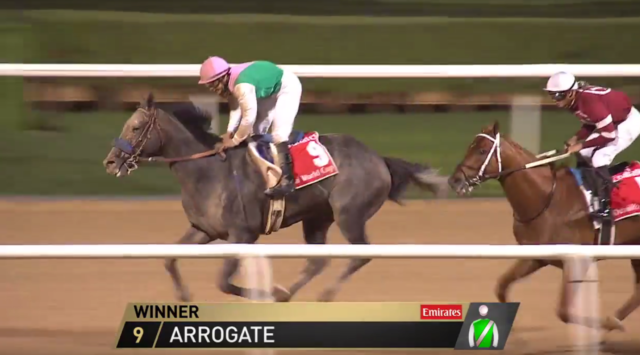 Overcoming a poor start leaving him last out of the gate, Arrogate conquered the field to win the Dubai World Cup in spectacular style.

We’ve run out of superlatives to describe Arrogate: he may hold a full quiver of titles, from World’s Greatest Racehorse to Breeders’ Cup Champion to Richest North American Racehorse in history, but all of these are just noise when you watch today’s performance in the Dubai World Cup:

Breaking sluggishly and then immediately getting squeezed out with hard bumps from Keen Ice and Furia Cruzada, Arrogate and Mike Smith were dead last at the start of the $10 million Dubai World Cup. The gray son of Tapit typically runs near the front, either setting the pace as he did in his record-smashing Travers Stakes or just off the pace as he exhibited in the Breeders’ Cup Classic and the Pegasus World Cup. Trailing a 13-horse field was certainly not in his typical playbook, and trainer Bob Baffert actually admitted to regretting his decision to bring the horse to Dubai in those moments.

However, this wasn’t a new place for jockey Mike Smith — according to post-race reports, Smith settled back and told himself to ride the horse as he used to ride Zenyatta, known for her heart-stopping closing style, rushing from the back of the pack to the front to sweep under the wire. Smith kept Arrogate clear of the tight field, cruising along to the outside before making a beautiful surge to pass the main brunt of the pack on the turn for home.

Other than a few taps with the whip to keep the colt’s focus, Smith and Arrogate picked off Neolithic and then Gun Runner under a hand ride, soaring under the wire clear in front and into history.

There should be no doubt in anyone’s mind that Arrogate is truly something special. The term has been thrown about quite a bit in recent years, but with such a performance as what we saw today, Arrogate is truly the real deal.