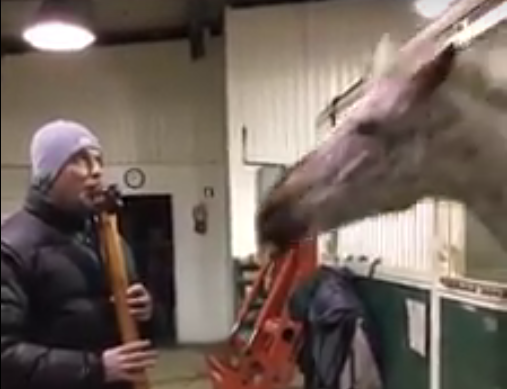 Pro tip: if you practice your music in the barn near this horse, you’ll always have an enthusiastic audience.

If you’ve mastered the Native American flute, why not play it in the barn for the horses? I can only imagine that this is the question this guy asked himself before heading out to serenade this charming Appaloosa. (According to the video description, this horse is a brother to the mare ridden by Leonardo DiCaprio in The Revenant — we were unable to confirm this.)

Comments on the video vary in opinion, with some viewers believing that the horse is simply asking for treats as he would anyone standing in front of his stall; others believe he’s truly enjoying the music. Still others believe that there is some cellular memory and the horse is responding to the music of his ancestors. Watch the video and decide for yourself:

Appaloosas, known for their distinctive spotted coats, were well-loved by the Nez Perce tribe in particular and selectively bred in what is now Idaho, Oregon and Washington. Much of this horsemanship culture and the horses themselves were destroyed in the Nez Perce War of 1877, but a dedicated group of breeders formed the Appaloosa Horse Club in 1938 to preserve the breed. The Appaloosa is now a popular breed and has influenced other breed registries as well, such as the Pony of the Americas as well as the Nez Perce Horse, a relatively newer breed formed by the tribe to recapture its lost horse culture.