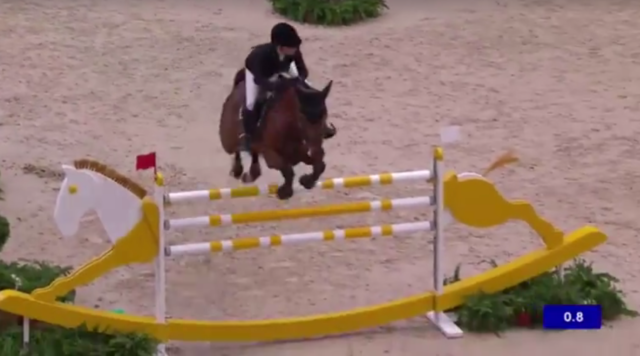 Only three horse and rider combinations made it to the jump-off round at the challenging Grand Prix Hermès in the Saut Hermès indoor competition in Paris last weekend — and the best of these was Edwina Tops-Alexander.

Out of 47 entries, only three made it clear around the incredibly tough Grand Prix Hermès on Sunday, March 19. Many riders retired after picking up 12 or more faults, saving their horses for another day. The course drew criticism from some showjumping fans who stated it was too challenging; others felt it was a fair test for a five-star competition. The only individuals who can truly say for sure whether it was too hard are the riders who battled it out in the arena, of course, so we won’t weigh in on that discussion.

For those of us riding from our computer chairs, however, the course definitely has us quaking. The Grand Palais is a stunning venue, with turn-of-the-century arches and domes over a tight arena space packed with fans, and we can’t imagine what it’s like to be there in person.

Fortunately, the fans who did attend were treated to quite the show when Edwina Tops-Alexander of Australia and her mare California laid down an impressive clear round to qualify for the jump-off:

Tops-Alexander and California went on to win the jump-off and the Grand Prix Hermès.

California is relatively new to this level of competition, but you wouldn’t guess it from watching her perform. It’s hard not to fall in love with this combination — we always appreciate a talented rider like Edwina aboard a plucky little mare coming to play with the big boys and girls!