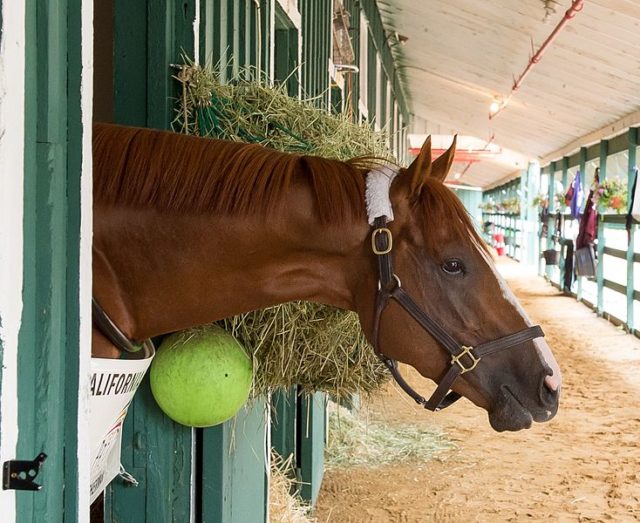 Another high-profile American stallion will join the ranks of those shuttling to the southern hemisphere to stand additional breeding seasons — Taylor Made Farm announced on Thursday that California Chrome will shuttle to Haras Sumaya in Chile for the next three seasons.

Twice named Horse of the Year, California Chrome ran a storied career that included plenty of global travel; his Triple Crown bid in 2014, though unsuccessful, captured the hearts of fans all over the world. He went on to win 10 graded stakes including the Dubai World Cup and is now the richest horse bred in North America. He retired to stud early in 2017 at Kentucky’s Taylor Made Farm and his first mares are confirmed in foal. “Chrome” stands in Kentucky for a fee of $40,000.

Taylor Made Farm President and CEO Duncan Taylor stated that “this was a decision that was not taken lightly.” Duncan Taylor himself with Ben Taylor flew to Chile to inspect farms, seeking only the best quality facility to house Chrome. Taylor Made personnel will accompany Chrome for his southern hemisphere seasons and will follow protocols established by Rood and Riddle with the on-location veterinarians at Sumaya.

The southern hemisphere has expressed great interest in California Chrome and it is expected that the stallion will see plenty of mares in Chile. California Chrome will enter quarantine and shuttle this year after the North American breeding season is over.

This announcement comes on the heels of news earlier in March, when Coolmore Stud announced that American Pharoah would shuttle to its facilities in Australia. Other high-profile horses who have shuttled to the southern hemisphere in recent years include Elusive Quality, Giant’s Causeway, Fusaichi Pegasus and Smarty Jones.

For an in-depth look at dual hemisphere breeding, we recommend this 2001 article from The Horse.

[California Chrome Will Shuttle to Chile]