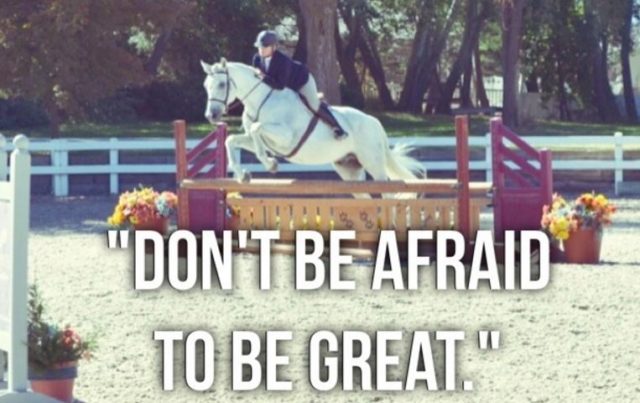 Channel your inner Mr. Miyagi and up the mental part of your game with top-notch self talk.

Mantras are a very common practice in other sports – a quick, memorable, and powerful inner dialogue to help you stay focused, collected, confident, or all of the above at once. Even non-athletes have found usefulness in a mantra – entrepreneurs, chefs, engineers and more.

In the equestrian world, many of our mantras revolve around the technical ideas we’re trying to retain when we go in the ring – “keep the inner thigh on,” “more leg,” or “sit back”. These are all useful, but at some point, we hit a place in a round where we’ve done as much technical drilling as we can, and we need a deeper, more powerful inner resolve.

To give you some inspiration for what that mantra might be, we’ve collected some of our favorite mantras from all walks of life that could easily be applied to a killer round in the ring.

Two-time Olympic gold medalist in beach volleyball Kerri Walsh knows a thing or two about success. She told reporters that her coach would tell her this before every match, and it gave her all the things she really needed at once: A little confidence, a little ferocity, and that ever-so-important oxygen that keeps everything running.

Paul Schwager is a brilliant business man, as well as the Associate Dean for the School of Business at Eastern Carolina University. He says it’s deeply important to focus on how to improve each step of our journey, rather than obsessing over getting some “one thing” completely perfect. Tell me that doesn’t translate perfectly to a set of fences!

Russell Wilson of the Seattle Seahawks has led his guys into some pretty tough battles and emerged victorious, and he believes deeply in this pre-game mantra. We can give ourselves all sorts of excuses about why someone else’s horse was more expensive, why our round won’t be as polished, or why it’s just not our time. But if you went in the ring believing this statement every round and you’ve put in the work, I guarantee one day it will come around.

Coach K was a legendary men’s basketball coach at Duke University, and this was a crucial part of the team strategy which has been adopted across many sports and teams. Screw up the last formation? Doesn’t matter. Next Play.

Eventually we’re all going to biff it at some point or another. We’re going to miss the distance to the triple, lose a stirrup for two fences, or chip in to a big oxer. “Next Play” is the mantra to clear your head and move on to the next thing immediately in front of you. Winners do not dwell on their mistake, they correct them as quickly as possible. This is key to minimizing errors.

Bruce Lee wasn’t just a kung fu movie star, but also an absolute artist of the genre and master of his martial arts craft. The expression “be water” first came to us as a line in one of his movies, but he applied it often. “Empty your mind! Be formless, shapeless, like water. If you put water  into a cup, it becomes the cup. Put it into a bottle, it becomes the  bottle. Water can  flow, or it can crash: Be water, my friend!”

It’s important to have a game plan and a goal going into a round or a weekend, or even a season. But adapting to your partner’s needs, the realities of what the course demands, and moving fluidly through the course may bring you to a new level of jumping nirvana.

NBA Coach Phil Jackson made miracle after miracle happen with the Chicago Bulls and the LA Lakers in his career, and he attributed much of that to his team’s system of preparation. Rather than focusing on winning the finals or taking home a ring or some other literal goal, they far exceeded just a goal and achieved a greatness which couldn’t be matched.

Do exactly what you know needs to be done to achieve success, and let go of how it turns out. You won’t only have better rounds, you’ll have more inner peace when the day is out and the chips fall how they may.

Omar Bradley was the mayor of Compton, California from 1993-2001 – an era of extreme difficulty, tumult, and uprising in a tough neighborhood. Mayor Bradley was completely devoted to trying to help bring young men and women up who struggled with poverty, lack of resources and access, and shortage on heroes.

In horses, there’s a lot of room for “somewhere in the middle”. And if that’s your goal, that’s okay. But if you want more than that, try to live each day at the barn embodying greatness, achievement, precision. Go in and shock the heck out of your trainer. Ride fearlessly.

It’s often said that if you’re trying to train in the warm-up ring, it’s already too late. If you’re fully prepared going into a show, you’ve got to let the training go, focus on what you have, and what you need to do to get it done. Michael Phelps uses this mantra before a race to remind himself that it’s not about all the little parts and pieces – that’s in place. Just dive in and do what needs doing. It would seem this mantra has worked, you know, pretty okay for the guy.

Erik Battes is one of the most celebrated chefs in the world, and while this mantra may seem a little deflating at first, in reality, it’s a great mantra for anyone who’s putting the blood, sweat and tears into bringing a horse up the levels. Rather than hiding a horse’s weaknesses, explore them until they disappear. Have your goal be to leave no cobwebs in the rafters or skeletons in the closet.

A great motto doesn’t have to be long or unusual to be exactly what you need. Olympic Gold Medalist Laurie Hernandez uses these words before every beam routine, pumping herself up, holding herself on a pedestal, and demanding that the world watch her do it with all her power and grace. Be Laurie Hernandez, guys. You got this.

Have a mantra of your own you hold dear before a big round? Send your mantras for a future reader edition to [email protected].