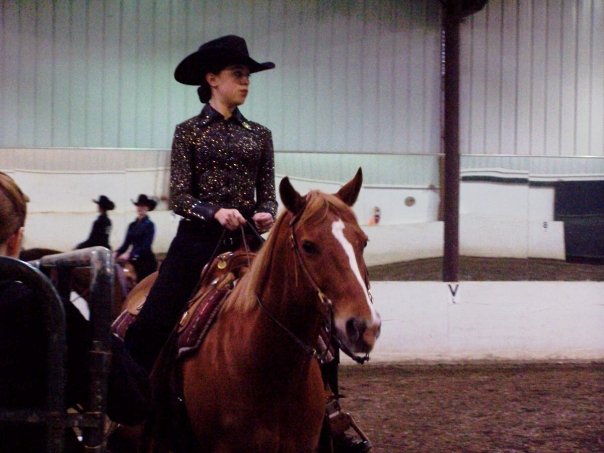 My name is Kristen, I’m a western rider, and I don’t love bling.

Now, I never said I didn’t like bling. I’d like to think I have an appropriate general-equestrian appreciation for shiny things, sure. I just simply don’t love it.

Let’s back up a minute and define bling, for those true-to-the-core traditionalists of any discipline: bling is a slang term referring to shiny, flashy things like jewelry, first originating in the hip hop world from the imagined sound of light striking a diamond or shiny object (try it in your head right now — or out loud if you want bonus points. All together now… bling!)

In the equestrian world, bling refers mostly to rhinestones (or if you’re really high-end, real Swarovski crystals). While a little bit of bling is starting to creep into the English-based disciplines (we see you, sparkly dressage browbands, rhinestone spurs and gemstone helmets) it’s long been comfortable territory for the western set, with bling on just about everything from saddles to bridles to fancy bits to custom stirrups, and we’re not even going to start talking about the show clothes.

I couldn’t put my finger on what specific discipline started the bling trend — was it when western pleasure started getting all shiny a few decades ago? Or should we look to the barrel racers and their propensity for things that sparkle? I couldn’t tell you. All I know is that seemingly overnight anyone armed with a Bedazzler and a box of rhinestones could set themselves up in a new cottage industry that preyed completely on our need to make everything — EVERYTHING — glitter.

I can, however, put my finger on when my own relationship with bling began. I remember when I rode on the college horsemanship team looking at a teammate’s western pleasure shirt that she had worn to the previous year’s Congress. The thing had so many rhinestones on it that we could literally stand it up on the bleachers like it contained a real live person, the sheer crust of the stones keeping the thing upright all on its own like some sort of exoskeleton.

Did it look really cool? Sure, the piece was a true work of art for the individual(s) who had to attach all the darn stones to it. It was a true investment for my teammate. It certainly caught the eye of almost everyone around it, who naturally oohed and aahed over how fabulous it really was. It also caught the light like a disco ball and I found it personally terrifying, like a beetle.

My own foray into the bling ring was a far cheaper version, a zip-up blouse I’m pretty sure I found secondhand on Ebay for the mid double-digits. It wasn’t covered in stones but in glitter, meaning that I literally left a trail of fairy dust around whatever show grounds or host facility we were visiting that week. I’m sure there’s still glitter stuck to the saddles in which I sat, years later. The glitter had a propensity for getting stuck to the inside of my coat, the seat on the team bus, my eyelids, hair, lodged up my nose and all sorts of other personal places. I had to store it in a hemertically-sealed bag (read: a grocery sack with the handles tied up really, really tightly) so that it didn’t glitter-bomb every other article of clothing I owned.

I hated the thing.

Years later, I wept with relief when the trend in horsemanship turned from bling-bling-bling to solid-colord Oxford shirts. When I discovered the discipline of versatility ranch horse (which states explicitly in its rule book that bling is not acceptable on horse nor rider) I thought perhaps I had found my people.

Now, I have an appreciation for a nicely-tooled bit of silver on a hand-crafted bridle, and the proper application of a glittering rhinestone can really accent a well-shaped head on a horse. A tasteful application of glitter or crystals on your show blouse can help catch the eye. There are four tiny rhinestones and some sparkly precious metals on the reined cowhorse trophy buckle I’m wearing right now as I write this (not because I’m trying to impress anyone… I just need something to help hold my pants up). I’ve got a cousin who barrel races and her blinged-out custom tack set exactly suits her personality and her spitfire little mare. I’m sure it looks amazing in bright arena lights.

But somehow, it just isn’t for me. I don’t know when crystals and conchos became synonymous with cowgirl, but the fervor of rhinestones and sparkly seems to have passed me by. I’ll still drool over custom leatherwork, hand-woven saddle blankets and one-of-kind bosals… but the bling thing no longer gets my heart pumping like it used to. Do I wish it did? Sometimes — because there’s some pretty cute stuff out there with rhinestones and glitter.

Imagining, however, trying to pull a crystal-concho headstall over my horse’s ears and strapping on spurs with a big bling the size of my palm, just feels disingenuous to me. I guess it’s just not who I am these days. I love looking at it — I’ll still oogle the Rodeo Drive display at a trade show and admire a sparkly belt or bridle any day. I just can’t bring myself to wear it any more. But hey — that’s the beauty of the horse world, right? To each, his own.