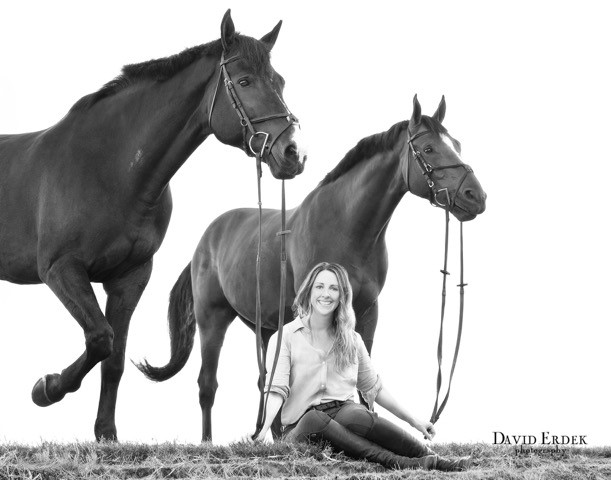 It’s not easy for any rider to earn a top ranking, but adult amateur Keyea Webster managed to get there, keeping several plates spinning at once. Jumper Nation’s Meagan DeLisle has the story. Twelve years out of the saddle didn’t stop adult amateur Keyea Webster from pursuing her equestrian dreams. After returning to the saddle just three and a half years ago, Keyea and her mount The Heist are currently ranked #1 in the West Coast Adult Jumpers in the North American League with a total score of 425 points. Her success doesn’t stop there; she is also ranked #5 with her young horse and recent addition, MTM Axel. Keyea doesn’t let life get in the way of her passion for the sport and has found creative ways to make the Adult Amateur dream a successful reality.

Keyea began riding at a young age as an Eventer and eventually transitioned to collegiate equitation while at Texas A&M where she competed on their NCAA equestrian team for four years.

Upon graduating, Keyea found herself faced with the difficult decision of taking a break from the saddle as she forged her way into her career and gained financial stability. 12 years later, with some encouragement from her parents, she found herself making her way back into the arena to compete in the hunters and later the jumper ring. She initially purchased a young horse that would allow her to show in the Baby Green division, but later decided to pursue other options.

After the sale of her green horse, Keyea decided to make the trip to Sweden to shop for a jumper mount. “It was my dream come true. I don’t know that I would do it again, but I just wanted to go horse shopping in Europe!” she said with a laugh. There she met The Heist (barn name Easy), a handsome then-10-year-old Swedish Warmblood gelding by Quite Easy with a quirky character and a sense of confidence in the ring.

“He has a great personality,” says Keyea of the gelding. “He is very sweet and he is very brave when you’re riding him. He would jump through fire, but on the ground he is scared of the noise that fly spray makes.” Keyea and Easy recently returned from showing in the 1.15m division and the $10,000 1.15m Classic at WEF, where they laid down great rounds and came home in the ribbons. Keyea with her horses The Heist and MTM Axel. PC: David Erdek Photography

She has also recently acquired MTM Axel, a seven-year-old gelding who she hopes one day to move up and show in the Low Amateurs. Despite his young age, Axel has already had some mileage in the Grand Prix ring. Keyea’s trainer, Bob Brawley of Brawley Farms, was mostly showing Axel in some 1.30-1.40m Speed classes, but at WEF Bob encouraged Keyea to step out of her comfort zone with him.

“WEF was actually my first show on the new horse. I was a little freaked out because I had to walk into the High Adults and I had never jumped more than six jumps on him, but he was just so consistent,” Keyea said about their WEF debut.

Like many adult amateurs, Keyea battles scheduling her work life and her equestrian life but thankfully her work as the Vice President of Land for an oil and gas company in Texas for the past 10 years has given her the ability to train and travel occasionally as needed. She supplements her income as a Rodan and Fields consultant, and uses her profits to help foot the bill for her equestrian career. With her barn an hour away from home, she has to get creative in her training and riding program, but she’s never let the complications or the commute slow down her ambition.

2017 holds a lot of firsts for Keyea and she is thankful to have a horse like Easy who knows his job and is ready to perform to help guide her along the way. After a successful and enjoyable debut at the Winter Equestrian Festival, she hopes to compete at a few recognized shows closer to home, such as Pin Oak in Katy, Texas in preparation for circuits in Kentucky and Michigan, and eventually the Indoors at the end of the year.

Keyea and Easy competing at the Bluegrass Festival at the Kentucky Horse Park in 2014:

When asked about her reaction to her #1 ranking, Keyea stated “Oh my God, I thought it was a typo! One of my best friends sent it to me on Friday night and said, ‘I don’t know if you saw this.’ A little bit of me wanted to tear up, but it makes me so happy for the horses that I have because I think they are so cool. It’s so fun to see their name up there, especially The Heist. They’ve taken care of me every time we show. It’s more special for me to see their names up there than my own.”

While taking 12 years out of the saddle was never a part of her plan, Keyea is simply thrilled to have horses back in her life and to be able to compete with partners that build her confidence. Her hard work and determination have helped her pave the way to this #1 ranking and she and both of her mounts are definitely duos you will want to keep following.