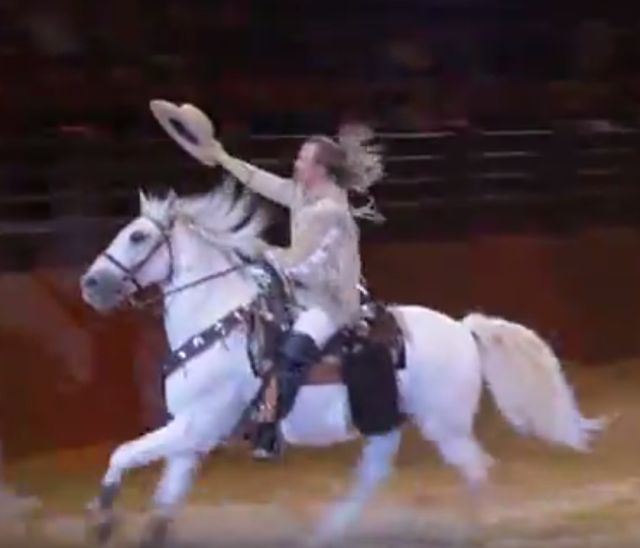 Grab your six-shooter and “lasso.”

This could be you! Screen shot.

The “wild west show,” full of cowboys, shoot ’em up scenes, Native Americans and plenty of livestock, may have had its traveling heyday around the turn of the century, but the concept has endured in various forms all over the world (remember the adorably kitschy PonyparkCity in the Netherlands?) If your equestrian dream has always been to perform in such a show, your time has come — Disneyland Paris is accepting applications for its Buffalo Bill’s Wild West Show dinner theater.

Disney is seeking equestrian actors to fill the roles of Cowboys, Stunts, Indians, Horse Riders and Annie Oakley (this particular version of the American West is clearly a man’s, man’s world). General job requirements for all of these positions include:

Other additional skills may also come in handy — Cowboys, for example, should be well-versed in rodeo or ranch riding, as well as have “ability to lasso” and handle longhorn cattle. Indians should have dance experience. All actors should be able to switch between comedic scenes and historical portrayal.

As the “Apply” link doesn’t actually seem to be working at the moment, I was unable to determine if the roles of Cowboy, Stunt, Indian or Horse Rider were only open for male applicants (they are described as male roles on the individual profile pages). Annie Oakley is clearly designated as the only female role in the entire production, and her position has a few special requirements, including a strong acting background as well as equestrian skills, ability to speak both French and English, firearm proficiency and a height between 5′ and 5’4″. If this sounds like your particular skill set, we may have just found the perfect job for you.