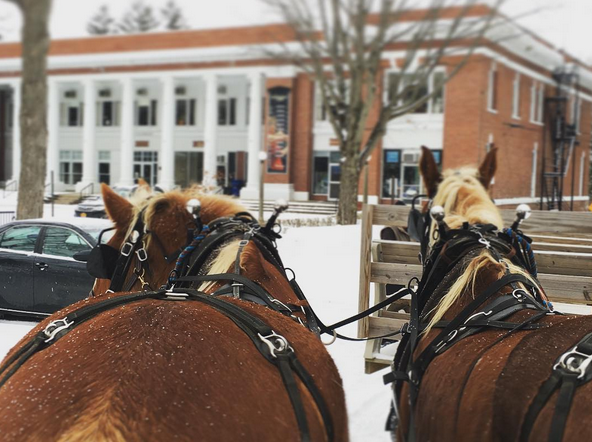 Time to own up, teamsters.

When you take a one-ton animal, attach it to a second one-ton animal, and then hook the pair of them to a wagon or rattly farm implement just for the fun of it, you’ve already made it pretty clear that you’re a little different from the rest of the world. This particular brand of interaction with horses comes with its own set of unique #drafthorseproblems… here are six things all draft equestrians know they’ve done at one point or another.

1. Taken a lot of pictures of draft horse butts. And you don’t even think about how weird it is until you flip through your phone or post it on Facebook and everyone has to comment all sassy about it. Until they invent a fifteen-foot-long selfie stick, get used to it, people.

2. Called something a thingamajigger, doo-dad, whatsit, etc. There are just so many parts… of the harness, of the hitch, of the wagon, and so on. You know you’ve found the right folks to help you when you can gesture vaguely to the horse and say “don’t forget to buckle the thinger” and they know exactly which strap you’re talking about.

3. Yelled some variation of “stop chewing on your brother!” from the wagon bench. My team, to the best of my knowledge, is not even distantly related, but they’ll always be brothers — they’ve just worked together for too long to be anything but family at this point. That said, they’re constantly doing weird horse things to each other like gentle gnawing, licking, rubbing in an attempt to slip out of the bridle, standing too close, making faces and generally picking on each other like… well, brothers.

4. Called a horse by the wrong name. My horses roughly match but they certainly look quite different from each other, so it’s embarrassing when I forget and call “Rock — Rand — whatever your name is” and leave it up to them to figure it out. In my defense, it doesn’t help that they were named alliteratively, as many draft teams are. It’s that much harder when I’m driving my father-in-law’s well-matched pairs of Percherons, which I don’t drive often enough to remember who is on which side.

5. Said gee when you meant to say haw. Fortunately, my team either really doesn’t listen or somehow knows where I intended to go without my guidance, because we’ve never managed to actually run into anything despite my inability to remember how to tell them to turn left or right. Thank goodness they do listen when I say whoa.

6. Nicknamed each horse, plus nicknamed the team. For some, such as my father-in-law, the team nicknames are simple: Young Team (the four-year-olds) and Old Team (the five-year-olds). It’s a fluid nickname, however; if we’re showing, then it’s Show Team (the four-year-olds) and Farm Team (the five-year-olds). I’m a bit more creative with Rocky and Randy, and they have several nicknames: The Rock and Rockford when he’s naughty; Randall and Randall James when he’s naughty. Together, they are the Wild Men. Why? I could not tell you, but it has stuck.

7. Run something from your pockets through the manure spreader. When you’re running a conventional manure spreader behind your tractor or all-terrain vehicle, there’s usually a safe bit of separation between yourself and your load. On a horse-drawn spreader, however, your seat hovers just above the load (which encourages you not to fall off the seat, for one thing). I glanced down the other day just before I threw the lever to turn on the belts and noticed my very nice fairly expensive leather glove lying on top of the pile where it had wiggled free from the pockets of my coat.

I’ve also come dangerously close to running an iPhone through the beaters. I’d be interested to know how the Lifeproof case holds up…