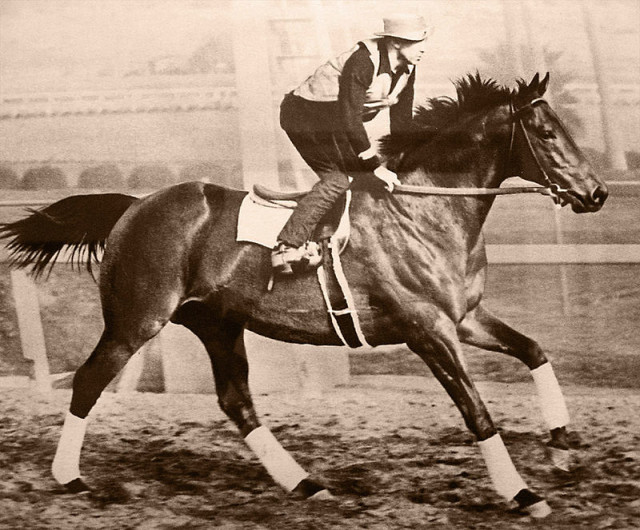 Eventer Dom Schramm posed a great question via Facebook a few days ago: if you could fill your barn with six historic horses, who would they be?

We’re always game for a fun horsey thought experiment, so when eventer Dom Schramm posted this question/game on his Facebook page on Sunday, we were all ears:

The descriptor “historic” leaves plenty open to interpretation — for the sake of clarity, we’re considering “historic” in this sense to refer to a horse who is retired from competition or has passed away. Here’s my list:

I love me a scrappy little horse with some ‘tude, and legendary racehorse Seabiscuit is all of those things. I am always captivated by Laura Hillenbrand’s brilliant biography of the Thoroughbred who rose from anonymity to not only win major races but the hearts of a nation who desperately needed a hero. Seabiscuit reportedly was not only a legendary horse on the track but also enjoyed trail riding around his owner’s California ranch and moving cattle around, so he’d fit right in at my place.

The gorgeous red roan cutting stallion is still kicking around at Aaron Ranch in Texas, but I’d love to rewind to 1995 or thereabouts when Peptoboonsmal was winning just about everything in the National Cutting Horse Association. Said to have a gelding-gentle disposition, needing minimal loping to work down for the show pen and very sound, “Pepto” has always been on my horsey wishlist. The fact that I’d likely fall off on the first three turns doesn’t bother me at all.

Okay, fine, I’ll fold. Who DOESN’T want this horse in their barn? We’ve basically run out of superlatives to describe this wonder horse. While it’s never been proven I’m 99% positive that it’s well within Valegro’s wheelhouse to make relative dressage idiots like myself look like we know what we’re doing, so that’s definitely a plus as well.

If I ever had the guts to actually ride a Grand Prix-level show jumping course, I would want two things on my side: a Thoroughbred, which I believe is a breed with a ton of courage and heart, and a mare, which I believe if you can get in your corner to form a loyal partnership would walk through fire for you. I love the way Touch of Class skims over these fences like a little deer, and while I certainly don’t profess to know how to ride a course like this it’s pretty to think that I could on a horse like this.

Frosted had the misfortune of running the same year as the incomparable American Pharoah, and his decent career was obviously overshadowed by Mr. Triple Crown/Grand Slam. While I’m sure Frosted has a fulfilling stud career ahead of him, I’d love to actually ride him around maybe in the equitation or hunter under saddle just for funsies — he’s a lovely mover, he looks like he’s adjusted to the post-track life quietly and to boot he’s a gorgeous, eye-catching dapple gray. Frosted, I just like you, buddy.

Rugged Lark was the ultimate all-around horse — he earned AQHA points in western pleasure, hunter under saddle, trail, hunter hack, reining, working hunter, western riding, pleasure driving and barrel racing. Basically, he could do almost anything. Under Lynn Palm, Rugged Lark performed bridleless before it was cool and impressed crowds in multiple disciplines with his tractability and demeanor. I’ve been lucky enough to ride a few offspring under Lynn Palm and if they’re anything like their grandsire, Rugged Lark was a real treat.

Who’s on your list? Let us know in the comments section — and go riding!