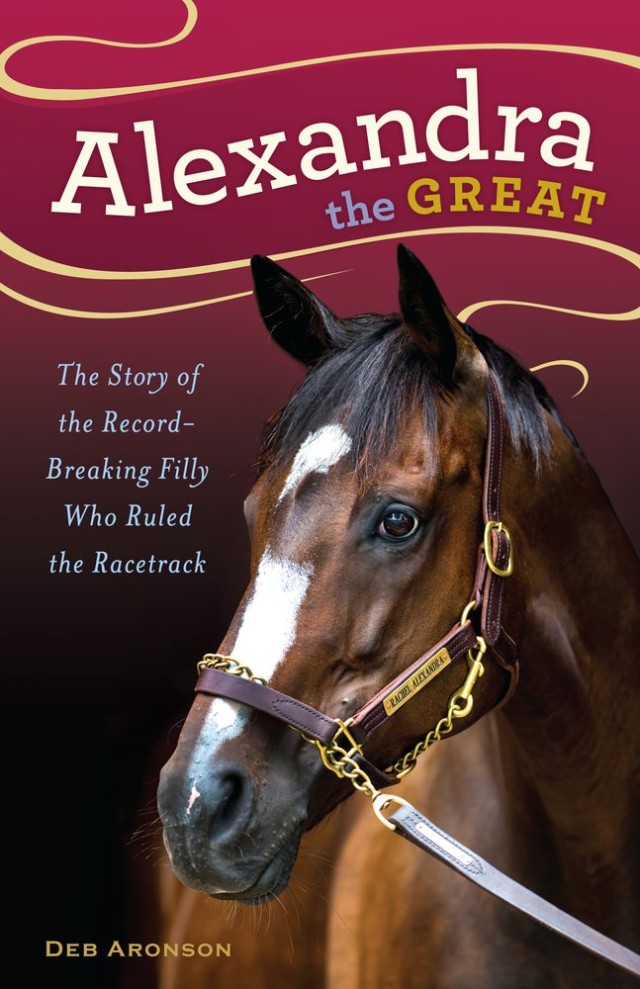 The high drama of Thoroughbred racing sets the stage for incredible stories, and the meteoric rise of the great filly Rachel Alexandra to the highest ranks of superstardom is certainly a story that deserves to be told. Deb Aronson chronicles the filly’s biography in this chapter book for younger readers, providing plenty of information to help introduce younger horse lovers into the world of horse racing, from birth to the highest levels of the sport.

As a biography, Alexandra the Great is a straightforward read, following the filly’s career in a linear tale from a less-than-auspicious beginning (the filly was rejected by her mother and needed to be raised by a nurse mare) all the way to “Rachel’s” first foals as a mother herself, with most of the book devoted to the filly’s incredible racing career. Racing not only against the fillies but also against the boys — and beating them in stunning fashion — Rachel Alexandra became an icon nation-wide, inspiring women and girls everywhere to challenge the idea of what they thought was possible.

Aronson made the decision not to anthropomorphize Rachel Alexandra, for which I was very grateful — especially with a book for younger readers, the temptation must be there to try to tell the story from the horse’s point of view. Thankfully, Aronson kept her treatment of Rachel Alexandra as a character totally objective, focusing instead through careful research on the people around Rachel who brought her raw racing talent into fruition.

That said, at times I felt that there was little development of anyone’s character — there were multiple times that I had to flip back and forth to remind myself who someone was, from Scooter, who started Rachel Alexandra as a yearling, to Hal, who trained the filly for roughly the first half of her racing career. I was never emotionally invested in these individuals; my own knowledge of jockey Calvin Borel helped color in for me as a reader the line drawing created by the author. While this may simply be due of Aronson trying to cover a lot of ground without bogging down younger readers in lots of detail, I felt that the story — which from a factual standpoint has plenty of fodder for a thrilling tale — didn’t grab me the way I hoped it would.

Aronson at times shifts from past tense to future to retrospective quotes from individuals that left the story feeling a bit disjointed. These shifts at best prevent the reader from really getting into the moment, even during thrilling race scenes, and at worst leave the reader confused as to what is actually happening when. Numerous references to the tragically legendary filly Ruffian are repetitive as Ruffian as introduced each time as an entity the reader hasn’t met before, despite the previous reference only ten pages prior.

These faults aside, Alexandra the Great is a great basic biography of one of the great fillies of recent racing history, and its easy-to-read style makes it appealing and informative to younger readers. The glossary at the end of the book is a great reference for youth interested in horse racing, providing definitions and context for racing terms as well as details from the breeding and raising of Thoroughbreds.

Alexandra the Great is available at Amazon.