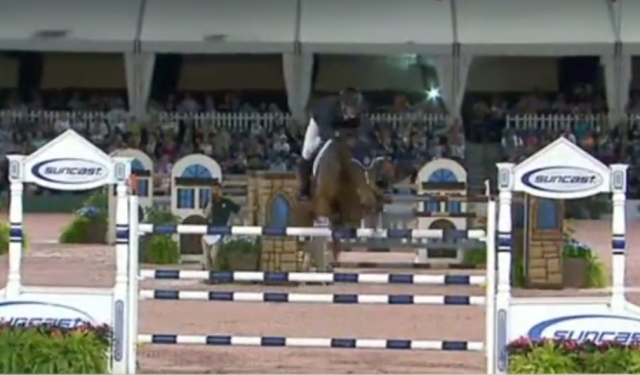 Watch McLain Ward and HH Azur do some serious work on the jump-off course in the Suncast Grand Prix CSI 5* at the Winter Equestrian Festival in Wellington!

“Go big or go home” is one of those hackneyed sports phrases that we love to throw around, usually tossed to our friends with a friendly slap on the leg as they enter the arena. We can only imagine that someone did the same thing to McLain Ward a second before he came in for the jump-off for the Suncast Grand Prix CSI 5* at the Winter Equestrian Festival in Wellington, Florida, and that Ward took those words to heart.

Aboard the super mare HH Azur, Ward laid down an unbelievable clear round, making turns and slicing fences that we would not believe possible if we hadn’t seen them: (video has no sound)

McLain Ward was a little hungry for this one — he’d been coming off a run of poor luck recently with a number of four-fault trips. As we all know as equestrians, even the best can have a bad run of shows, and it’s great to see our hero McLain come out and reaffirm that he is one of the best in the world, bad days and all.

Ward plans to show HH Azur only for two weeks at WEF before pointing the mare towards the FEI World Cup in Omaha. Keep an eye on our sister site Jumper Nation for more show jumping news and updates!