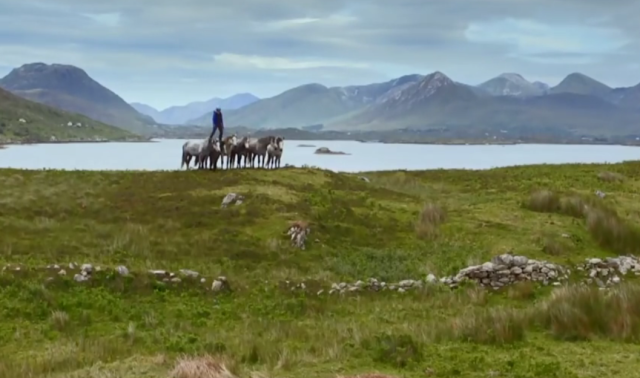 Inspired by her 2015 Island Project.

If Emma Massingale is not on your trainer radar, she should be. The UK-based professional specializes in liberty work, constantly pushing the limits not in how she can make her horses perform but in how she can perfect her relationship with her animals.

One prime example — the Island Project of 2015.

Massingale took her trained liberty team of four Connemara ponies, as well as two untrained younger Connemaras, to a small, uninhabited island off the coast of Ireland. All six ponies were turned loose and Massingale was left alone with just a few essentials (including the ever-important camera charger) to live for a month, with the goal of riding her two green, unbacked ponies.

Check out the BBC’s coverage of her adventure:

You can view the trailer for the full documentary and purchase a downloadable version of the full 52 minutes by visiting Vimeo.

Rough camping on an uninhabited island with just the ponies for company obviously tested Massingale’s limits, but also showed her — and the world — what we are capable of achieving with horses with the proper approach. Realizing that the experience was truly life-changing, Massingale decided to share the adventure — with a few small modifications for creature comforts.

From September 29 through October 5, 2017, Emma Massingale will host a clinic on another island off the coast of Connemara, Ireland — not the little uninhabited rock she lived on in 2015, but close enough that a guided kayak trip to the original island is on the clinic agenda! Participants will stay in bungalows on the island with Massingale and her ponies; each participant will work one-on-one with a pony towards liberty.

Clinic days will include half a day of work with the ponies, with the other half of each day spent in tours and activities (such as kayaking, visiting a local Connemara stud or exploring the rugged island coastline. The £2650.00 cost is all-inclusive for seven nights, excluding airfare — you won’t need to spear-fish for your supper like Massingale did in the Island Project, though we’re sure if you really wanted to you probably could.

Only six slots are available for this unique adventure — visit Emma Massingale’s website to learn more!