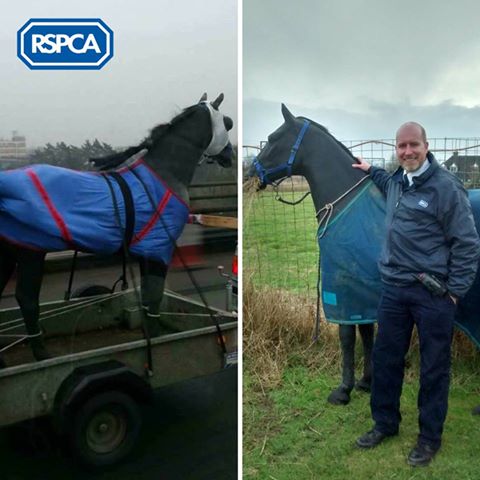 Concerned citizens blew up the phones at the Royal Society for the Prevention of Cruelty to Animals (RSPCA) of Great Britain on Valentines Day to alert authorities that a horse was being transported down the highway on a flatbed trailer, apparently strapped into place. Wearing a sheet and a hood, the horse appeared to be taking his unusual mode of transportation fairly well, despite the fact that each individual leg was lashed to a corner of the trailer as though he had been loaded by barbarians.

The horse took in the sights for over 100 miles before reaching his final destination in Cambridge. RSPCA tracked the owners down and visited the property to find out that the horse in question was, in fact, plastic. The horse’s owners had purchased him — er, it — in Birmingham and the only logical way to get such a large, life-size sculpture home over 100 miles away was to strap it down on a flatbed trailer.

In the concerned callers’ defense, the horse does look fairly realistic, especially with the added props of a sheet and hood and a lifelike mane and tail whipping in the slipstream. If this bad boy whizzed past you on the highway and you glanced at your window, I suppose you could believe that it was a real horse, somehow very much okay with all four legs being lashed to a flatbed trailer with the wind in his hair. It’s always a good idea to call the authorities if you see such a scene flying past you on the highway, no matter how quietly the horse appears to be traveling.
The RSCPA official was quite relieved to find a plastic horse and not a real one at the end of this particular trip.Go riding!