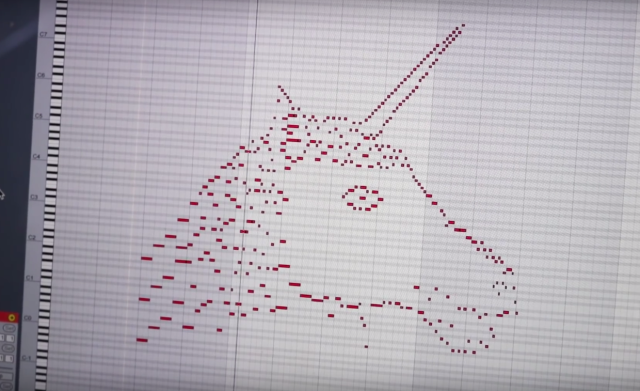 …and it has just a very lightly sinister tone to it somehow that makes us ever-so-slightly uneasy. I freaking love the internet.

One of the basic rules of the internet is that if you’ve thought about it, it exists somewhere. (Try it — think of something and then Google it.) Case in point, if you Google “song made out of a unicorn” there is, in fact, one such composition:

Enjoy a unicorn made out of music notes pic.twitter.com/f4oMZDa50b

I feel like maybe 10 years ago when I was in college and hung out part time with the band geeks (spoiler: I was a college band geek, as well as diehard equestrian) I would have been able to explain this better, but alas, a full decade has passed (jeepers) and now I find that words totally fail me. So I’m going to let the composer explain it himself:

So reasons that this MIDI unicorn does not fill us with hope, joy, love and all of the emotions you might expect to feel from a song made from a unicorn may include:

But hey, Andrew Huang, we have to hand it to you, because this is the best-sounding unicorn song we’ve ever heard in our lives.