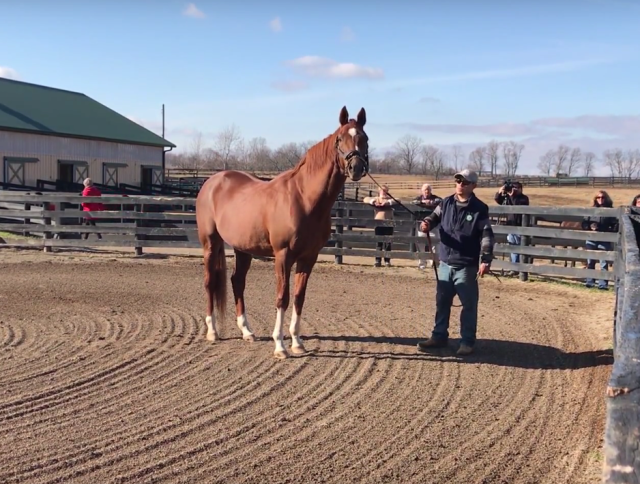 The stallion died at Old Friends Farm of Kentucky.

Charismatic in December 2016, repatriating in Kentucky. Screen shot via YouTube.

In 1999, the year that Charismatic became an unlikely Triple Crown contender, I was ten years old, horse-crazy and just starting what would become a lifelong fascination with horse racing. Charismatic, in his own way, became “my” horse — the first Thoroughbred I remember rooting for, the first equine celebrity I realized I could get behind and cheer for the way my friends and family cheered for sports teams.

The chromey chestnut colt wasn’t necessarily a born superstar — trained by D. Wayne Lukas and owned by Bob and Beverly Lewis, Charismatic ran in several claimers before finding his legs in his three-year-old season to become a Derby hopeful. He entered the Kentucky Derby as a 31-1 longshot and surprised everyone when he withstood challenges from the rest of the field to win. Still not the favorite for the Preakness Stakes, despite a Derby victory, Charismatic again surprised critics, cruising home a length and a half in front.

The Belmont Stakes proved to be fateful, with Charismatic finally the 2-1 favorite to win with hopes of ending the 21-year Triple Crown drought — but the colt suddenly backed off the pace just a furlong from the wire out in front, and jockey Chris Antley eased him home and then jumped off right after the finish line, sensing an injury in the horse’s left fore. Antley cradled Charismatic’s injured leg until the horse could be vanned off the track with what would be discovered to be career-ending multiple fractures; Antley’s actions are credited with saving the horse’s life.

After surgery, during which four screws were placed in the left foreleg, Charismatic started his stud career in 2000 at Lane’s End Farm. After the 2002 season, the stallion was shipped to Japan to stand at JBBA’s Shizunai Stallion Station, where his career continued until he retired after the 2016 season. His offspring include 263 winners of over $44.5 million in both Japan and the United States.

Thanks to efforts from Old Friends Farm of Kentucky, which specializes in offering retired champions a place to live out their days in peace, partnering with Charismatic’s former owners as well as donations, Charismatic was able to come home after retiring from stud. In December of 2016, the horse returned to Kentucky:

Tragically, his retirement only lasted a few months: on February 19, 2017, Charismatic was found dead in his stall at Old Friends. While a necropsy is expected to reveal the cause of death, his passing remains a shock as the 21-year-old stallion appeared to be in excellent health and condition. He appears to have passed peacefully after thriving in retirement.

Old Friends Farm published the following eulogy, which you can read in its original form on Facebook:

All I can tell you is that it was, by all appearances, a peaceful end. There were no signs of struggle, no evidence of distress. Whatever took the great red stallion in the hours between dark and dawn came quickly and stole him away. In life, his brightest moments blazed across the firmament like some comet, burning intensely before returning to earth like a large wounded bird. In his star crossed life, however, the bird he resembled most was the mythical phoenix – and like that legendary creature, Charismatic rose from his storied break down in the Belmont, and crossed the ocean to stand in Japan for many years. In the end, the oft expressed wish that he come home was fulfilled late last year. It was a cold, clear evening when the van pulled up the driveway. As night fell on the bluegrass, a tall, impressive stallion walked off the ramp and into our Old Friends family. He was led to the center of the barn where he stopped and faced his public. As eyes strained in the darkness and voices raised in welcome, he let out a great neigh in return. It was deep and clear and impressive. His voice echoed over the hills. The phoenix had landed, home at last.

This morning, the great soul lay silent. His resting place undisturbed. He was so still and peaceful James commented that his tail still looked freshly combed out. Sadly, James and Tammy made the long walk to the door to tell Michael he was gone. Ten years worth of effort to bring Charismatic home went by quickly, but in the end, we were granted only months with him. During that time, he was adored and well cared for. He was reunited with old friends and greeted with smiles and carrots. He completed quarantine and was starting to enjoy turn out in the paddock that had been Ogygian’s and Precisionist’s before him. He was curious and content. He grazed snugly in his Rambo coat, as he had yet to grow winter wool. He rolled in the mud and happily trotted along the fence line. He enjoyed excellent care from our primary veterinarian, Dr. Brian Waldridge, who was more than a little enamored with him. We were just getting to know him, myself included. Two years after losing Creator, I found myself growing fond of the sweet little gray gelding, Skip’s World. When I stepped in the barn to give Skippy a carrot, I had one for Charismatic too. He never failed to look at me with not a little side eye, as if to say, hey, you’re feeding him first?! I won the Kentucky Derby and the Preakness, you know. And I’d step over and say, no one would ever forget that, big guy. You’re the best.

This is a post no one wants to read and I certainly never wanted to write. But the truth is, and I will attribute this to our farm manager, Tim Wilson…every night, the universe holds a lottery. It’s just a question of who’s name is called. On February 19, the celestial herd called Charismatic home. In time, there will be an official cause of death and further information will be shared, because we all want to make clinical sense of a loss we can’t fathom emotionally. I get that, folks, I really do. But for now, we are a house in mourning. For those who met and/or admired him, we share your grief. Until I see you again, Charismatic, I know you’ll be keeping good company……Your friend, Vivien

Rest in peace, Charismatic. Thank you for the memories.