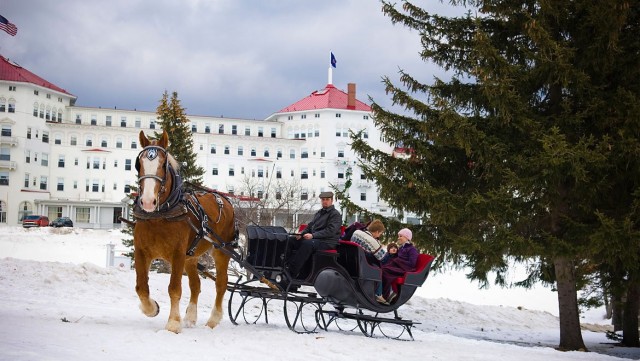 What horse person doesn’t dream of dashing through the snow in an open sleigh, snuggled up next to a loved one, laughing all the way?

Jingle bells and all. Photo courtesy of the Omni Mount Washington.

My beloved, Cortney, and I booked a stay at the historic Omni Mount Washington Hotel in New Hampshire to celebrate our anniversary last month. Our intention was to spend most of each day skiing at Bretton Woods across the street, but the hotel and surrounding area has a plethora of other activities to entertain visitors as well: snowshoeing, canopy tours, ice skating, snowmobiling, the spa and, you guessed it, sleigh rides.

If we did anything else besides ski, eat and drink for three days, we were going to go for a sleigh ride.

The Gilded Age of the Grand Hotel

The completion of the Cog Railway through Crawford Notch in 1875 effectively ushered in the age of the grand hotel. Until then, a carriage road provided the only access to the White Mountains of New Hampshire. It was a wild and wonderful place which became a hub for social connection and whimsical art.

“This kind of ground obviously lends itself to getting out there and enjoying nature,” said Craig Clemmer, a director at the Mount Washington. “That kind of inspiration, whether you’re seated on a horse or hiking, it’s elegance on the edge of wilderness.”

The Mount Washington was the ambitious enterprise of coal and railroad tycoon Joseph Stickney. Construction began in 1900, on the back side of the Gilded Age. Two years later, Thomas Edison turned on the lights and the doors were opened to the public.

Designed by architect Charles Alling Gifford, the Mount Washington was one of the most innovative and luxurious hotels of the time. Whereas other area grand hotels earned their status with intermittent expansions, the Mount Washington was conceived as a 200-room masterpiece on a 10,000-acre estate. Today, it is one of the last remaining grand hotels still in operation. 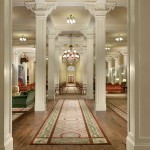 The great hall. Photo courtesy of the Omni Mount Washington. 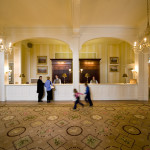 The lobby. Photo courtesy of the Omni Mount Washington. 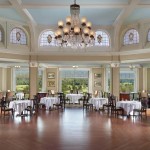 Sadly, Mr. Stickney died just a year after the hotel opened, leaving everything to his young wife Carolyn Foster who was, for all intents and purposes, a horse person. She disliked motor cars so much she would not allow them to pull up to the front of the hotel. Only horses and carriages were allowed to use the front door, while automobile passengers were forced to use an alternative entrance which today serves as the valet lot. A pair of matching white carriage horses were her own preferred method of travel.

Despite her distaste for cars, she cared about the assets of her guests, so Carolyn built a 100+ stall car barn. That building was eventually dismantled, but Craig explained that the wooden beams were repurposed in the construction of the Latitude 44 restaurant and Hobbit Ski Center at Bretton Woods.

Horses are still an integral part of the Mount Washington experience, now as a family-friendly activity rather than a transportation necessity. While there are one and two-horse drawn sleigh rides in the winter, the resort offers trail rides in the summer plus a year-round barn buddies program that introduces children to the magic of horses.

This was the view from our room! Photo by Leslie Threlkeld.

Having served as the livery for several grand hotels in the area, the Bretton Woods Stables actually predate the hotel and today’s equine inhabitants still reside in the original barn.

Luke Thorn is the resort’s stablemaster now in his fourteenth year on the job. He not only drives the sleigh, but he is in charge of every aspect of the horses’ care, right down to the horse shoes he makes on the forge. Luke owns the horses himself, sourcing them from around the country to be safe, friendly additions to the resort stables. The steady steed for our evening sleigh ride was Ralph, a 23-year-old Belgium whom Luke affectionately called the “little guy” of the barn.

Luke and Ralph picked us up after sunset where we were waiting inside a heated outbuilding. Having been deprived of the smell of horses for a few days I had a snuggle session with Ralph before climbing into the open sleigh and settling down under the thick blankets provided.

Our escorts, Luke and Ralph. Photo by Leslie Threlkeld.

Off we went, jingling up the drive, passed the historic Bretton Woods Inn (we ate a celebratory dinner there the following night, and it was easily the best meal we had on the whole trip). Beyond the Inn we passed by what looked like the front of a mansion but was in fact the entrance to the barn.

We soon escaped the wind as we entered the shelter of the woods. Gliding along the quiet trail I marveled at how un-phased Ralph was by the darkness and night sounds, but Luke assured us he’s an experienced old chap who knows his job. For the next half hour, Ralph sure-footedly dragged us through the snow while the three of us chatted.

Not long into the ride Cortney dug into his backpack and came up with a bottle of wine and two glasses (how thoughtful!). Clinking our cups together in ceremony, I thought what a perfect opportunity this would be for a couple in love to make a lifelong promise to each other.

“Do you get a lot of proposals during sleigh rides?” I asked Luke.

He laughed and confirmed, “All the time. Especially on Valentine’s Day and we’ve had nine already this month. We even did a horse drawn wedding once.”

Emerging from the woods, we packed up our wine, thanked Luke and Ralph and boarded the shuttle to go to dinner. While we didn’t exactly go dashing through the snow in the dark, I can check a romantic sleigh ride off my bucket list.

It looks like a house, but that’s the front entrance to the barn. Photo by Leslie Threlkeld.

But the trip to the Omni Mount Washington will be one I remember forever for a different reason.

There would have been a tenth proposal that month, had I only stopped talking about horses long enough for Cortney to pop the question! Not to mention I slammed shut the window of opportunity by asking about proposals in the first place.

“It had potential,” Cortney laughed, explaining it all to me later.

I may have botched his first attempt, but good humored as Cortney is he brushed it off and tried again the next day. He surprised me at the top of the mountain, with the whole world beneath our feet and the sun glittering off the surface of the snow.