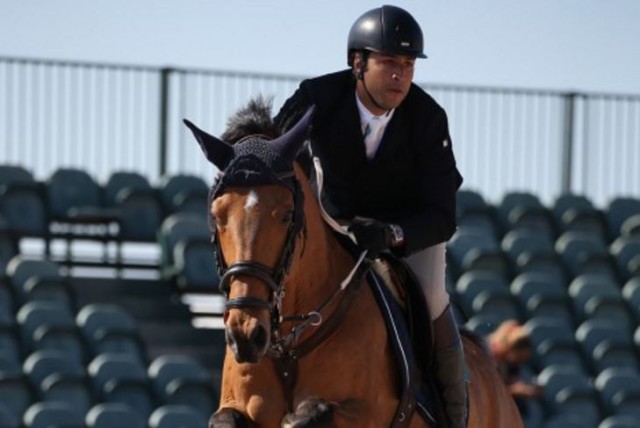 Luiz Francisco de Azevedo was Collin’s last lifeline, but with time, the relationship soon turned from a rescue to a winning combination. Read about their big win at WEF, courtesy of our sister site, Jumper Nation! “It was a really nice class today. I am really happy with my horse,” de Azevedo stated following his win. “I was 12th to go, and I knew that the course was good for me. My horse has a really big stride, and he is always going. Sometimes I lose a little bit of time in the turns, but then I can always do one less stride in the lines easily. I enjoy that quality that he has, and we had a good opportunity to win this class.”

Collin’s story did not begin like many horses competing at the international level. The horse was seven years old when de Azevedo found him and was on his way to being sold for slaughter. The horse’s trajectory quickly changed, however, with one life-changing phone call.

“Two and a half years ago nobody wanted this horse,” de Azevedo stated. “He was really wild and really difficult to ride. Then a friend of mine called me and said he found a horse that I might be able to jump. He was seven years old, but he had never done a show in his life. My friend told me the horse was a little bit different, but I said, ‘Okay, let’s see what he can do.'”

De Azevedo was given a half share of the horse, and he took Collin to the horse’s first competition two weeks later.

“He jumped the first day 1.30m clear, the second day 1.35m clear, and the third day 1.40m clear in the first show of his life!” de Azevedo recalled. “Now he is my second horse, and I am really lucky to have him. It is so unbelievable. We bought him for nothing. We tell that story, and people do not believe it.” Luiz and Collin in their winning moment. Photo courtesy of Sportfot/PBIEC

De Azevedo thanks his friend for seeing Collin and believing in him, but the rider mostly gives credit to the horse.
“It is him,” de Azevedo said of Collin. “I just gave him a chance to arrive. The quality is in the horse.”

Also competing in the Global Arena at Equestrian Village on Wednesday, the $6,000 Illustrated Properties 1.40m speed class was held, with a win for Peter Leone (USA) and Lionshare Farm’s Capito Z.