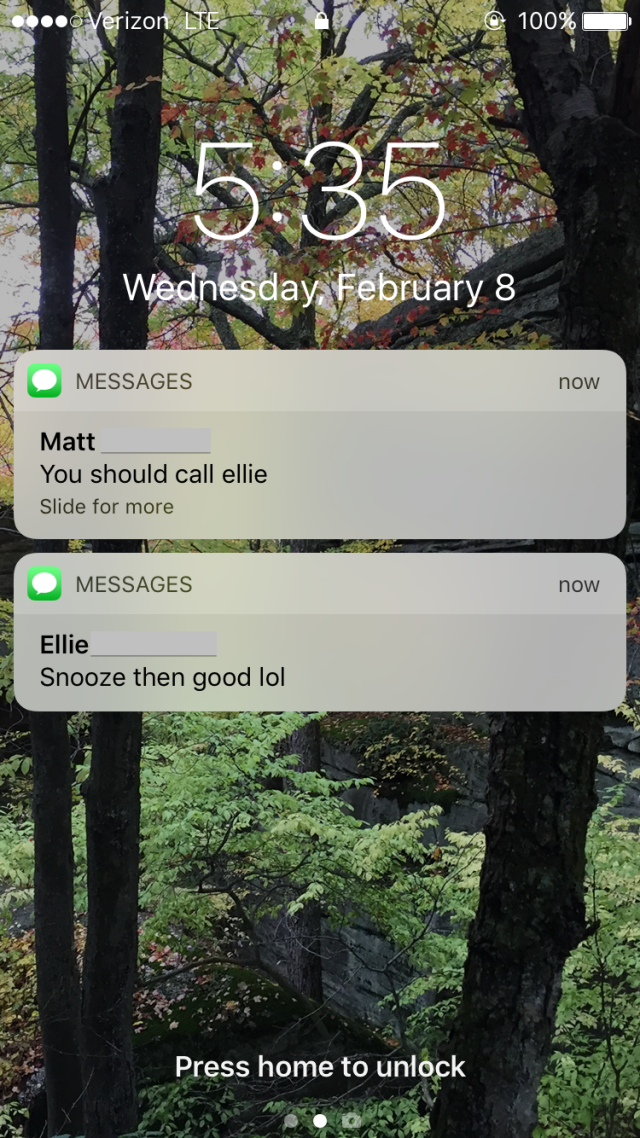 Or, what to do when your friend is a late riser.

The picture is a screenshot taken after a failed wake-up call, in which Ellie tried to convince me that she was getting up, but her boyfriend Matt let me know otherwise and that a second call was needed to wake her up.

Practicing at 6:30 AM three days a week (and working at the library at 8 AM the other two weekdays) have made my body forget what it’s like to sleep in. While I don’t exactly spring out of bed at my 5:15 alarm, it feels wrong to be in bed any later, like I’m wasting my day if it’s 8:00 and I haven’t already ridden a horse. Despite being well into this semester’s schedule, however, it seems that my “early to bed, early to rise” schedule hasn’t quite caught on with some of my late-rising friends. I’ve had to get creative to help one of my teammates in particular get to morning practices on time, listed below.

1. Wake-up calls: If I haven’t heard from her by 5:30, I call — depending on her level of grogginess, she might decline the call, miss it altogether (this is the best case scenario as it means she is up and around, just without her phone), or answer semi-coherently (as in the conversation wherein I asked if she was awake or if I had woken her up, and she replied “…I’m unsure”).

2. Guilt-tripping: If Step 1 fails and my call goes straight to voicemail, I resort to texting things like, “Our coaches will be so disappointed!” or “So-and-so will beat you at the next show if you don’t come to practice!” This is probably the least-pleasant option to wake up to, but its effectiveness keeps it near the top of the list.

3. Bribes: I have resorted (only once) to waking up extra early to make cinnamon rolls for practice, which was an effective incentive for my teammate to get out of bed and to the barn before they ran out. This option may be the least sustainable as it requires getting up at 4:30 AM, a time when some college students are just going to bed.

Besides food, bribing with pets may be effective. Often, a picture of our coach’s dog sent in a text message is enough of an incentive to get a move on.

4. White lies: “Yes, of course you’re riding [insert favorite horse’s name] in practice this morning!” “The coaches said anyone who’s late to practice today has to run three laps around the arena!” “I brought doughnuts this morning, you’ll have to hurry or they’ll all be gone!” After a while, said late-riser might catch on, but with luck and carefully-chosen white lies, they will hopefully be concerned enough to get up.

Go riding… any time of the day.