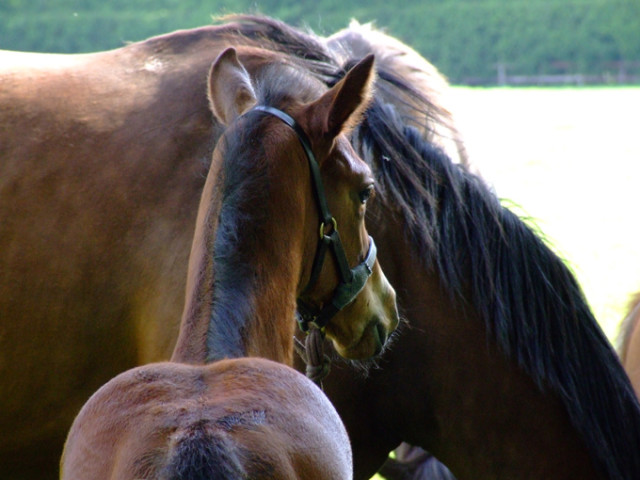 Lisa Gaudio had been separated from her horse of a lifetime, a Half-Arabian mare named Kyrie, for 15 years due to life circumstances, always vowing to find her again. Sadly, when her dreams finally came true and Kyrie came home to her barn in Pennsylvania, crippling laminitis kept the mare in chronic pain and Gaudio made the decision to put the mare down.

But this was not to be end of the road for Kyrie’s legacy — just 20 minutes after euthanasia, the veterinarian team removed the mare’s ovaries and rushed them to New Bolton, where 16 oocytes or eggs were harvested, shipped carefully overnight to Texas A&M and fertilized via intracytoplasmic sperm injection or ICSI. Four embryos developed in the lab at Texas A&M before transfer to recipient mares, three of which became pregnant.

These three foals are all the more miraculous considering they were born not only so long after their mother passed away — especially considering her eggs were harvested after death.

ICSI is a recently developed breeding technique — intracytoplasmic sperm injection fertilizes a single donor oocyte in a laboratory with a single donor sperm. The process is typically used for mares that are not good candidates for conventional and routine embryo transfer or for breeding stallions with limited sperm supply or who are poor candidates for conventional insemination. And in rare cases, ICSI can be utilized to produce an embryo from a mare from an oocyte harvested just after death.

The system certainly requires careful timing — this process works best with a planned euthanasia, as the ovaries need to be harvested as rapidly as possible after death with minimal transportation time. In the case of Kyrie, proximity to New Bolton’s reproductive center set the process up for success.

Following the harvest of oocytes from the ovaries, a semen shipment needs to be prepared. For certain breed registries, a hair follicle sample for DNA testing may also be required. Some breed registries will not allow foals bred through ICSI.

Texas A&M reports as of 2013 that an average of four oocytes per harvest will mature in the lab to be injected with sperm; about 20% of eggs should be expected to develop a blastocyst (the structure of cells preceding an embryo) when semen from a fertile stallion is used. The embryo transfer process results in about a 79% pregnancy rate, with 20% of those pregnancies resulting in an early loss in the first 30 days. With so much loss expected, Kyrie’s three miracle foals are miraculous indeed.