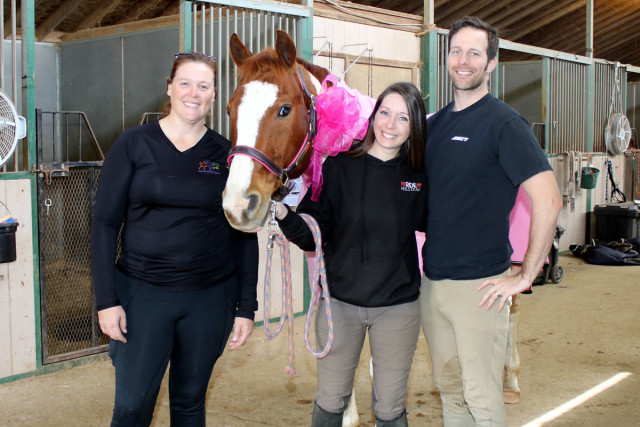 While amateur eventing blogger Ainsley Jacobs’ horse JJ recovers from an injury, Ainsley treats us to flashbacks from their story — such as the day JJ officially became part of the family!

No, HE is not a SHE. I just really like pink. 🙂 Photo by Go With It Farm

After more than thirty years of waiting, the day I’d been dreaming of for my entire life finally came true – I bought my first horse.

I’ve wanted my own horse ever since I can remember, and I still ask Santa for “a pony” every year. (Yes, even as an adult. Don’t judge me!) Amazingly enough, after a lifetime of working my butt off and struggling to pay my student loan debts, I was finally in a financial situation where buying a horse was not only not-scary, it was actually feasible.

JJ and I had been working together since July, 2014, and of course, he was the only horse I even considered purchasing. I knew we made a good team, even though we both still have a lot to learn. I trust him, and I’m so grateful to him for how he’s taken care of me over the years. I wanted to be able to return the favor and give him a forever home as a thank you.

I discussed the opportunity with my husband, Erik, for more hours than he probably should have tolerated. An incredibly supportive horse husband, and just a great husband in general, Erik (as well as my trainer, Halliea) kept telling me to go for it. “If this is something you want, then let’s do it.” He’s amazing.

Once I had convinced myself that this was something I realistically could, and should, do (it took me several months to realize that, I won’t lie), I told my trainer that I was ready, and we began the pre-purchase exchange.

I’m fortunate enough that I not only know JJ’s history from having worked with him the past few years, but his previous mommy, Wendy, is also a friend of mine. (Long story short: we “met” when I was doing pre-event research prior to my first 3-phase and accidentally found her blog. I commented on a post, then we shockingly realized we were both going to be riding at the same event the coming weekend, and she saw I was entered on her old horse – JJ! Small world, huh?) I knew his past, I knew his history, and I knew what I was getting myself into. Not many horse buyers are lucky enough to be in that situation!

We scheduled a pre-purchase exam, just to make sure there were no underlying issues that would wind up being detrimental to JJ in the future, and that it wasn’t unfair of me to continue to ask him to be an event horse. I have (eventual, delusional) dreams of getting to Training level someday, and I want to make sure he’ll be okay doing that. Everything went well, and JJ practically fell asleep while getting poked and prodded.

When the big day came to sign the papers, hand over the cash, and make it official, I was surprisingly calm. Yes, I was happy and excited, but I wasn’t freak-out-smile-giddy like I thought I would be… maybe it was because JJ had been practically mine for so long already? All I know is, after the transaction took place at our local bank and we headed to the barn to see “my boy”, that all changed.

Some of my amazing friends had gotten to the barn early, bathed JJ (who is happiest when he is absolutely filthy) and had him standing in the barn aisle waiting for my arrival, complete with “happy horsewarming” gifts. Halliea, my trainer, had made a huge, pink sparkly bow and attached it to JJ’s beautiful, fancy new show halter (complete with “JJ Spot, owned by Ainsley Jacobs” nameplate) that she had gotten for me as a surprise. Beth, GWIF’s assistant trainer and my good friend, had JJ draped in a cute pink cooler, and Camryn, one of the awesome working students, got me an obnoxiously awesome sparkly pink saddle pad.

When I walked into the barn and saw him there, I started bawling like a baby. Happy tears are totally a thing, and I definitely did the ugly cry. Halliea handed JJ’s lead rope to me, and I officially took possession of my first horse. I hugged him, then her, then my husband, and all my friends who were there. Then I proceeded to stare, dumbfounded, at my horse.

I wanted Erik, who lessons occasionally, to have the honor of taking the first ride on “our” new horse, because I wanted him to know how much I appreciate his support with my riding passion. Erik hadn’t ever really ridden JJ before, except for one little walk around the arena a few months ago, so he had no idea what to expect. He did a little warmup at the trot and canter, then popped JJ over some cross-rails. I couldn’t stop laughing when Erik brought him to a stop in front of me and proclaimed “Whoa, he’s REALLY cool!!” Um, yes, I know – that’s why we bought him.

Erik had the honor of taking the first ride on our new horse. Photo by Ainsley Jacobs/P.TEN Marketing

In the words of my great trainer, “Just buy the damn horse.” If you want it bad enough, you’ll find a way to make it work – whether that’s owning a horse, or anything else. Life is short. Make your dreams happen.