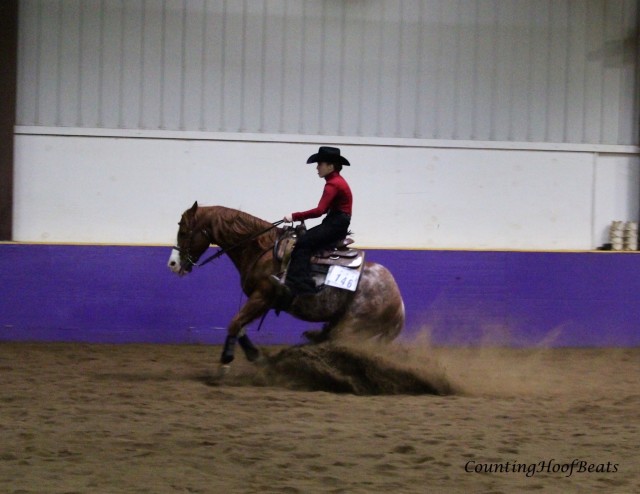 Before you get to actually sliding, that is.

Done well, a sliding stop in reining looks seamless: the horse melting into the ground smoothly and pedaling to a soft stop before gathering up for a rollback. If you watch a high-level reining class at the Quarter Horse Congress, it might even look like sliding stops are one of the easiest parts of the pattern. From someone who had to learn otherwise the hard way, here are some of the types of sliding stops you get when you’re not quite on Shawn Flarida’s level.

1. The Fanny-Slapper (also known as the Post-Pounder)

You may feel confident going into one of these stops. Your horse may be increasing speed smoothly and feel straight underneath you, but when you say “whoa,” you’re suddenly catapulted in the air with no hope of landing smoothly in the saddle. You land, inevitably, with an audible “smack” (especially if you’re wearing chaps) loud enough to ensure no one misses your embarrassment. Bruising on the rider’s butt and ego may occur as a result of this stop.

2. The Rock-Skipper (or, the Pogo Stick)

This is the kind of stop you get when your horse hits the ground hard with his front feet and bounces to a stop instead of sliding under himself with his back end, so called because the rider will hit the saddle several times during the stop like a rock skipping across water.

Commonly seen in horsemanship riders who cross over into reining with little experience (read: me when I first started reining), this rider lopes nicely to the marker with excellent posture and even cadence, then completes a sharp halt and 180 degree turn on the haunches.

4. The Fish out of Water

You thought you were riding a horse, but when you go into a sliding stop, whatever is going on under you does not feel like something a horse is capable of — he’s twisting and flailing, like a fish you’re trying to reel in, only bigger and you’re not sure whether it’s safer to bail off or keep reeling him in. You might be halfway through a rollback going the wrong way before you even finished stopping, making you re-evaluate who’s steering in this pattern.

This type of stop transcends several disciplines, from the hunter/jumper ring to a fast-paced obstacle trail ride to the reining pen. It occurs when the horse stops drastically sooner than the rider expected, often ending with the rider either somersaulted off the front or rock-skipped up the neck. Sometimes this stop is unintentional, as when a horse decides to slam on the brakes one stride out from a fence, but mostly it’s experienced by new reiners who don’t quite have the sense of balance and timing needed to sit a sliding stop when they say “whoa.”

What kind of stops have you accomplished in your riding career? Let us know in the comments! Go riding.