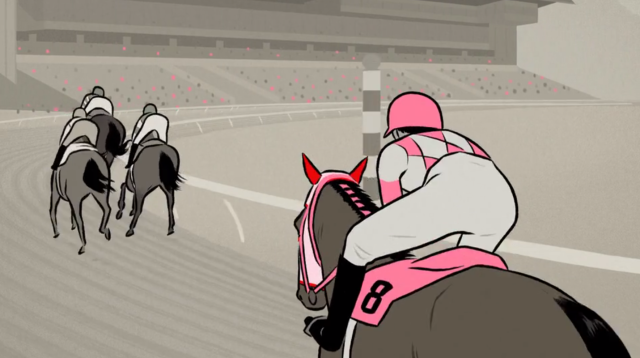 The subject of a brilliant mini-doc, Haru Urara is “The Shining Star of Losers Everywhere.” Check out her fascinating story.

The horse world is familiar with the story of Seabiscuit: a scrappy little mud-colored horse who had floundered around in the lowest levels of racing before he was discovered by a perfect storm of connections, the ultimate owner-trainer-jockey trifecta who plucked him from two-bit racing and discovered the star waiting to be developed.

The horse lifted not only his connections from obscurity, winning big all over the country including his famous showdown match race with War Admiral, but also lifted a country from despair in the midst of the Great Depression. The story of Seabiscuit is one of those rare cases of a racehorse becoming something so much bigger than himself.

Japan, as it turns out, had a Seabiscuit of its own: Haru Urara was a mud-colored mare who floundered around in the lowest levels of racing. Unlike Seabiscuit, however, she missed that meteoric rise to the best graded stakes company, that underdog come-from-behind story that inspired a nation. Haru Urara was simply not a good racehorse.

Yet somehow, this nobody of a mare bedecked in a Hello Kitty hood still managed to grab a nation by the heart when it needed her the most — a living, galloping metaphor that no matter what life threw your way it was still important to just keep running. Haru Urara, for Japan, was “The Shining Star of Losers Everywhere.”

Watch how this obscure racehorse gripped Japan in a period of economic depression when many people tried to simply find a reason to get out bed in the morning: the 18-minute long documentary is well worth the time. You may laugh, you may cry, you may find a brand-new message of hope:

Haru Urara, our hats are off to you.