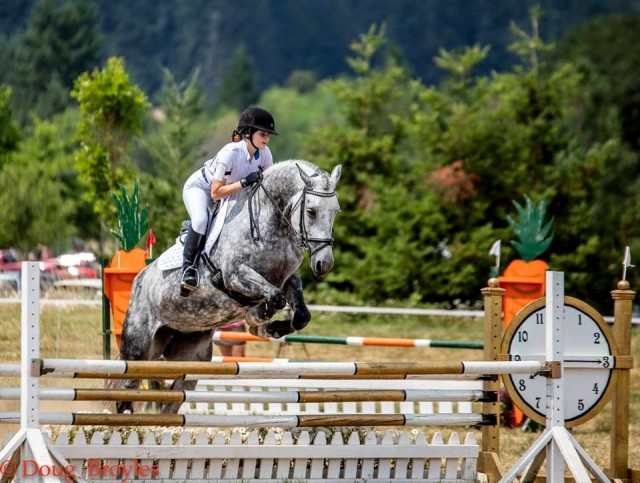 Biz Stamm, with some help from her curious student Morgan Gardner and her beautiful “mystery mare,” takes an in-depth look at how breed genetic testing works.

Morgan and Marika warming up for dressage at Inavale Horse Trials. Photo by Charlotte Gardner.

Pedigrees and bloodlines can mean a lot when horse shopping, and for good reason. Certain breeds have certain aptitudes, and there is a lot of logic in seeking a horse that will be best suited to your goals — but every once in a while you come across a horse, and without knowing a thing about its ancestral background, you know instantly you were meant to be together.

That is precisely what happened to my student Morgan when she met her horse Marika for the first time. This past fall, curiosity got the better of Morgan and she decided she just had to know what was in Marika’s lineage. I’ll let Morgan take it away here to describe her horse’s background.

Morgan: I bought my horse Marika with the previous owners not really being sure what her breeding was. They had rescued her from a kill buyer with the only information given being her approximate age. They knew that she definitely had draft in her, but weren’t sure what else. My riding instructor Biz had sent in a sample for her horse regarding his color genetics which piqued my curiosity and prompted me to test my horse to determine her ancestral genetics.

I used the service provided at the animal genetics laboratory at Texas A&M. The sampling process was pretty straightforward: to submit a sample, I needed 30 to 50 pulled mane or tail hairs with the root follicle attached. I decided to pull mane hairs because it was easier to have the root of the hair still attached and the hair wasn’t as long. I then put the hair in a zip-lock bag to keep it all together. There’s a sample submission form that you need to fill out and send in along with $40 testing fee.

Biz: I’m going to take the reins for a second (pun totally intended) and explain how your horse’s ancestry is determined from those tiny hair follicles.

Inside every single cell that makes up your horse’s body are complete sets of instructions detailing how to make your particular horse (with the exception of epigenetic variation, but we’ll talk about that when we discuss equine cloning!). Those instructions come in the form of genes constructed of DNA. Despite the wide variety in physical appearance (we call that “phenotype” in science speak), there really isn’t enough variability of functional genes to differentiate between breeds of horses due to the fact that mutations of functional genes are more often than not lethal and therefore not passed on to future generations.

In order to tell one breed from the next, we need to look at markers in the highly variable regions of DNA between the genes. The ancestry test performed by Texas A&M looks at a specific class of intergenic markers known as microsatellites. These are short, repeated sequences where the number of repeats can vary from breed to breed (e.g. microsatellite sequence = ATG, Breed A = ATGATG, Breed B = ATGATGATGATG). The more microsatellite markers used in the analysis, the more precise the test results will be.

Once the hair is received by the lab, DNA is extracted and the microsatellite regions are “amplified” using a process know as polymerase chain reaction (PCR). So let’s pause for a second and push the picture of DNA strands rocking out on tiny electric guitars out of our minds, because that’s not what I mean by “amplify,” though that would be awesome.

PCR, so much action in such small tubes! Wikimedia Commons/Madprime/CC

Short fragments of DNA, known as primers, are added to the purified DNA from your horse’s hair follicles. These primers are specific to the regions of DNA you are trying to amplify, so in this case, the microsatellite markers used to differentiate between breeds.

Back to Morgan for the test results!

Morgan: Marika’s number one match was Percheron, which we knew she had in her. Then she tested to have Friesian and Irish Draft in her lines. These last two came as a surprise to me because we originally thought she was Hanoverian, Thoroughbred and Percheron. After taking more time to think about it, I could see the different breeds in her by the way she was built and the way she moved.

Morgan and Marika on x-country at Inavale Horse Trials. Photo by Tim O’Neal

Before I found out Marika’s actual breeding, I already knew she had some draft in her. This makes keeping her fit very hard because of how big she is, and how slow her metabolism is. This also contributes to her diet because she doesn’t need a lot of food to keep her at a healthy weight. If anything, she’s a little too easy to keep weight on, and can get quite pudgy if I don’t closely monitor her diet and training program. Regardless of her DNA, though, she is a great horse and I love her very much!

If you’re interested in getting your horse tested to determine ancestral DNA, visit the Texas A&M animal genetics website for more information.