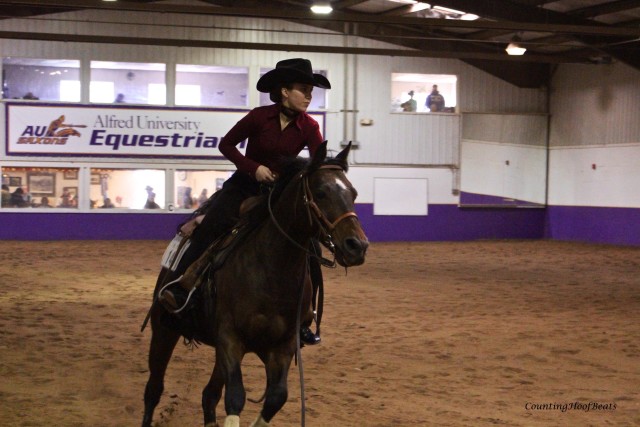 Haley Ruffner introduces us to this critical role in reining.

“Minus half.” I sit in a folding chair next to the judge, clipboard in my lap, pencil poised above a reining scoresheet. I mark the box, then subtract it from the last maneuver score to keep track as I go along. The rider gallops down into the final sliding stop past the center marker, popping out of the saddle and back down again into a jarring stop. “Ah, the old fanny slapper. Minus half,” the judge says again. I struggle to contain my laughter at the aptness of her description, knowing I’ve done the “fanny slapper” myself more times than I care to count. I’m scribing for today’s reining show, and while it’s an important job I’m having a lot of fun too.

Having a scribe for reining allows the judge to dictate scores without having to look down at a scoresheet and potentially miss something during the pattern. This also streamlines the show, saving time between classes by having one person designated to tally up the scores during each ride. As a scribe, it was my responsibility to listen closely and keep track of the judge’s spoken scores throughout the day. Fortunately, filling out a reining scoresheet is fairly self-explanatory — each maneuver corresponds to a box, in which I write the score between -1 ½ and +1 ½. Above each of these is another box for any penalty points accrued during that maneuver, to be subtracted from each rider’s score at the end of the pattern.

It’s a different perspective from that chair next to the judge, reading the mixture of fear and determination on riders’ faces as they approach the center to begin their pattern. I wonder briefly what judges see in my expression when I come into the arena, then recall what I look like in most horse show pictures and hope they don’t look at my face at all. I notice how fast penalty points add up, how obvious it is from this angle when riders miss their center marker in rundowns, how important it is to hit the middle of the arena on circles.

Adding and subtracting, blowing the whistle when riders went off pattern, and moving chairs back and forth between horsemanship and reining classes made for an exhausting but educational weekend. As an English writing major with little to no math skills beyond addition and subtraction, I was oddly proud of myself when I kept up with a rapid-fire series of penalties and poor maneuver scores to total a score in the forties before the rider had made it out of the arena.

Both judges for the weekend pointed things out — a too-quick hand, a crooked lead change attempt, a rein slipped the wrong way — that I might not have noticed or known to look for. They made note of, and reflected in their scores, the things my coaches drill in practice all the time. Details, like setting up for lead departures, starting spins correctly and running even circles that stay off the wall but use the arena well never went unnoticed, trivial though they can seem from horseback. Whether I find myself in the next chair over someday, telling my own scores to a scribe, or continue competing in reining, I am grateful for the chance to listen to and learn from such knowledgeable judges.