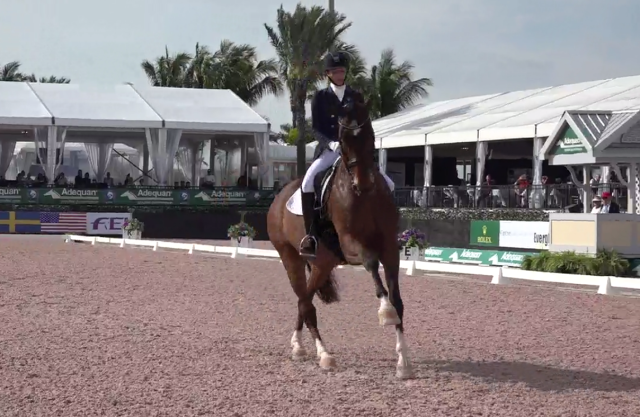 Laura Graves is off and running in 2017: Week 3 of the Adequan Global Dressage Festival, held in Wellington, Florida, saw Graves and her Verdades win not one but two Grand Prix victories!

Laura Graves and Verdades made sure that they were noticed in the pair’s first competition since the 2016 Olympic Games in Rio where they took home team bronze — on Thursday, January 26, the opening day of Week 3 of the Adequan Global Dressage Festival (AGDF), Graves and “Diddy” won the FEI Grand Prix CDI-W and promptly followed that victory with another win on Friday night in the FEI Grand Prix Freestyle CDI-W.

Despite Diddy’s well-known sensitivity, Graves reported that he schooled beautifully and gave her some very rideable maneuvers, with Thursday’s performance earning at 76.660% from the judges and a standing ovation from spectators. Friday’s freestyle brought down the house with an 80.728%.

Of note is that the freestyle performance is only the sixth time a score greater than 80% has been earned at the AGDF. Graves and Verdades hold three of those scores.

Here are highlights from Thursday’s performance. A full high-quality video can be viewed here.

Graves’ goal for 2017 is to qualify for the FEI World Cup Finals, which will be held in Omaha at the end of March into early April.