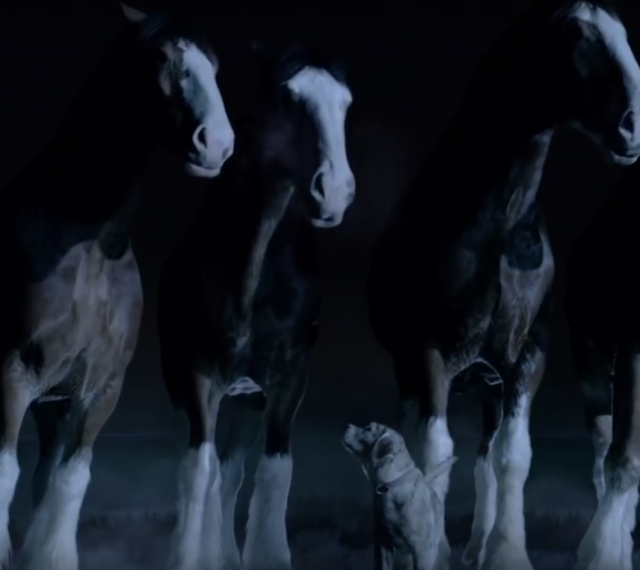 Sources say “sort of but not really.”

One of the highlights of the Super Bowl every year for horse people is eagerly awaiting what new cinematic masterpiece the marketing folks at Budweiser have created for us (or if you’re like me, politely excusing yourself from the room so you don’t turn into a blubbering mess during the latest anthropomorphized imaging of what those Clydesdales are up to now).

And for awhile, it seemed like each year we’d be treated to another tear-jerking mini-movie (“Puppy Love” or “Lost Dog,” anyone?) starring America’s favorite draft horses. You remember:

But in 2016, Anheuser-Busch shocked everyone who was looking forward to another horse-and-puppy sob-fest with this commercial — yeah, the Clydesdales got a few beauty shots in there but otherwise this was a rather testosterone-fueled advertisement for actual BEER. Oh right, I guess that is what Budweiser’s actually selling.

So what can we expect in 2017? Super Bowl ads are become notoriously like films these days, with advertising agencies releasing previews and teasers weeks before the big day to make sure we’re all paying attention during the ever-frequent commercial breaks. No such luck so far with Budweiser; we haven’t spotted any teasers floating around the internet.

However, according to Variety, discussing the kabillion dollars that Anheuser-Busch is spending on this year’s Super Bowl:

“Meanwhile, ads for Budweiser, devised by Anomaly, will tout its history, and evoke the tale of co-founder Adolphus Busch, who worked hard to attain his version of the American Dream. Viewers are likely to see at least an appearance by the company’s famous Clydesdales, though they will not be the star of the spots.

We’ll still be keeping an eagle eye out during the game — after all, the Clydesdale hitch traces back to 1933, when the first hitch was given as a gift by August A. Busch, Jr. and Adolphus Busch to their father as a celebration of the end of Prohibition. Since then, the hitch has become iconic and “Clydesdale” has nearly become synonymous with “Budweiser,” at least to most horse people. (Somehow thanks to Anheuser-Busch the word “Clydesdale” has also become synonymous with “draft horse” much in the same way that “Kleenex” has come to mean “facial tissue” but that’s another subject for another day.)

In the meantime, I guess there’s always this to look forward to: