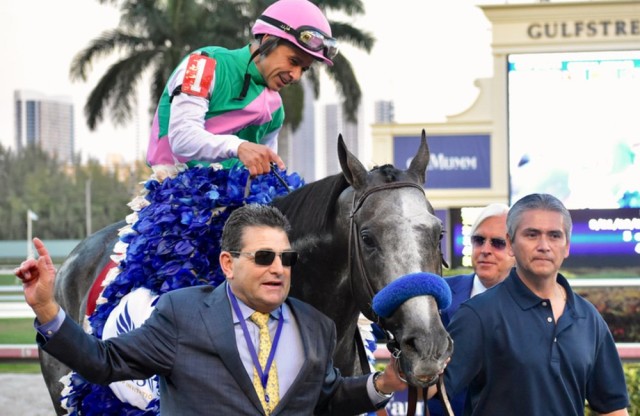 Arrogate reigns supreme as the first ever #PegasusWorldCup champion! pic.twitter.com/vWvHmblZYD

California Chrome will sadly not put a win as the final notch in his lucrative racing belt after never really firing in the Pegusus World Cup at Gulfstream Park in Hollywood, Florida. The Pegasus World Cup now holds the title of the richest race in the world with a purse of $12 million, taking the crown from the Dubai World Cup. This was also set up to be a match race between arguably the two best active racehorses in the country, though Arrogate quickly put to rest any shadows of doubt surrounding his talent.

Pulling away to win by 4 3/4 lengths over place finishing and hard charging Shaman Ghost, Arrogate made the 1 1/8 mile distance look easy while California Chrome was let up by the quarter pole.

Perhaps attributing to his race performance, Chrome was found after the race to have some fluid in his right knee. The swelling was reported to have gone down some by Sunday and the horse shipped on schedule to Lexington, where he will now retire at stud at the beautiful Taylor Made Farm. The veterinary staff at Taylor Made will give the suspect knee every attention to make sure any injury does heal.

We’d like to tip our hats and express our thanks to the chestnut horse who could, and we wish Chrome the happiest of retirements.