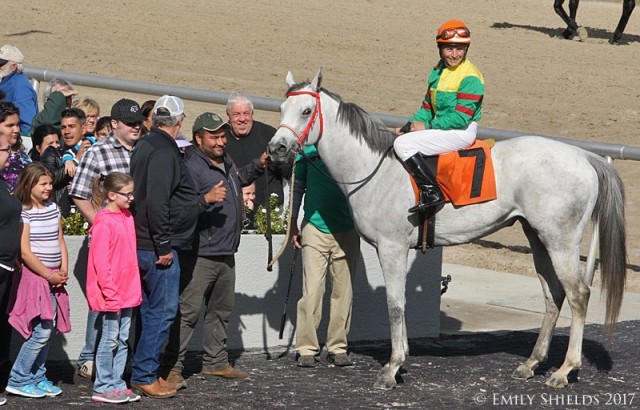 Sue Martin is #goals. Not only is she still actively riding at age 62, she’s still riding as a jockey… and winning to boot. Aboard Blue Haze of Fire, Martin won a claiming race on Sunday at Tampa Bay Downs, marking her first win since 2014. Since Martin’s only riding a handful of races these days, that’s not a bad record.

Martin rode her first race in 1973 in Idaho. Also in the mid 1970s, she married trainer Wayne Martin; it was Wayne who trained her mount on Sunday. Amid the usual rough-and-tumble jockey life, Sue Martin also made time for having a family, with seven children, 18 grandchildren and four great-grandchildren.

According to Martin, there are no plans to retire any time soon. We salute you, Sue Martin, and wish you all the best in your continued career!

If you’d like to watch a replay, click here to open Tampa Bay Downs’ replay site — select Sunday, January 29 and watch Race 4. Blue Haze of Fire and Sue are the 7 horse.