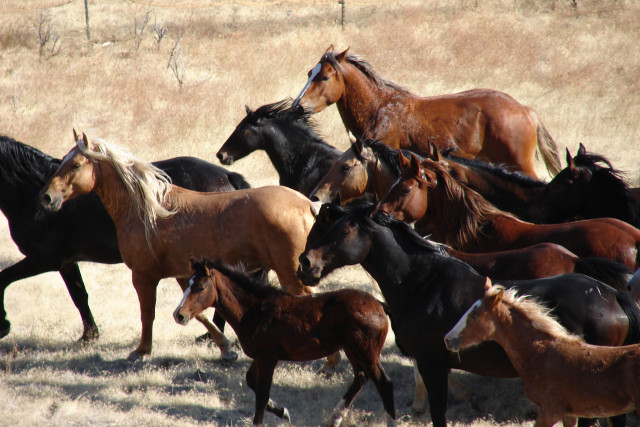 On the heels of U.S. Congress’ rule change early in the month to make the transfer of federal lands easier, a bill has been introduced to sell 3.3 million acres of BLM land. Some Herd Management Areas for mustangs may be at stake.

Early in January, the House of Representatives voted on a rules package including a provision that allowed Congress to more easily transfer federal lands to state or local governments. This change in policy made many wild horse lovers nervous, the latest in a series of warning signs that some members of Congress wished to sell or even give away public lands on which America’s mustangs roam. The latest step may hit even closer to home for our wild horses.

To direct the Secretary of the Interior to sell certain Federal lands in Arizona, Colorado, Idaho, Montana, Nebraska, Nevada, New Mexico, Oregon, Utah, and Wyoming, previously identified as suitable for disposal, and for other purposes.

A summary of the bill is in progress.

The lands “identified as suitable for disposal” refer to 3.3 million acres of Bureau of Land Management land as designated by a 1997 report under the Clinton administration. The original report, performed by the Department of the Interior twenty years ago, was intended to find “unreserved and unappropriated lands” that would be suitable for sale to benefit restoration efforts in the Florida Everglades. The Bureau of Land Management was the only government agency found to hold lands that met that criteria. The entire land disposal report can be viewed via Chaffetz’ website by clicking here.

Land parcels are grouped by state and analyzed by county, with surrounded land use as well as impediments to disposal listed. The amount of land in each county deemed suitable for sale varies from a few hundred acres to tens of thousands. The total acreage across the ten states is 3.3 million acres.

The Bureau of Land Management is charged with the task of protecting the nation’s wild horse herds while allowing for multiple uses of land, including mining, livestock grazing and logging. The BLM has designated Herd Management Areas (HMAs) for mustangs and wild burros in Oregon, Idaho, Montana, Wyoming, Colorado, Utah, Nevada, California, Arizona and New Mexico. Herd Areas (HAs) refer to places where wild horses can be found but not managed by the BLM.

Since HMAs and HAs are listed by BLM district and not be county, it is difficult to ascertain whether or not these wild horse areas fall under any of the areas described in the 1997 land disposal report. There is no active map showing where the lands suitable for sale are located. To answer this question, we reached out to Representative Chaffetz’ office, which responded that they were “not sure about Herd Areas.”

If land including parts or entire HMAs or HAs were to be sold privately, it’s unclear what would happen to any wild horses residing on the same property.

Requests for comment to the Bureau of Land Management legislative office and Wild Horse Management offices were not returned.

This is not the first time that Chaffetz has attempted to pass such legislation: in January of 2015, he introduced a similar bill that was referred to the Subcommittee on Federal Lands where it died at the end of session. That bill stated that any proceeds from the sale of land would go directly to the Treasury.

We will continue to monitor this bill’s progress and further developments. In the meantime, if you feel strongly about the sale of public lands including possible wild horse territory, we encourage you to contact your legislative representatives.