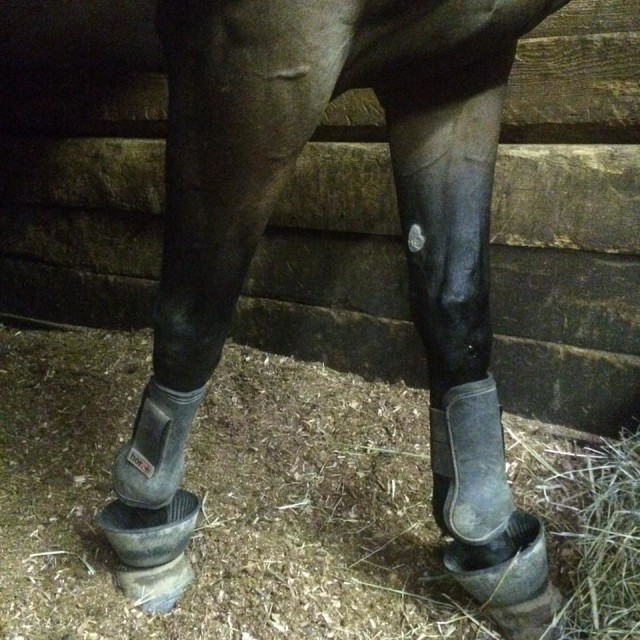 Forever deserving of our love.

One of the hardest parts of loving an equestrian is morphing into their horse show significant other. The learning curve is huge if you have little to no horsey background; bridles and halters are not the same thing, the horse can see through the fly mask, and yes, we do need to buy this many saddle pads.

For many, it’s a long and hard journey loving a horse person when you are not one yourself. And I am here to tell you, as an equestrian wife with a clueless horse show husband in training, we appreciate you. We appreciate every second you give up to help us haul water buckets, blanket horses who try to bite you, and film all of our rides while your hand cramps up from holding the camera for so long. That being said, we know you are not perfect and have a ways to go in obtaining your advanced status, but we just can’t help but giggle when you have mishaps….

“I told him Velcro on the outside…”

Technically, he did this correctly! While Emily may be the one to boot her horses from now on, she can’t say enough positive things about her boyfriend. “He is so supportive of me staying late or driving out at the crack of dawn to spend time with my horse and always wishes me good luck before rolling over and going back to sleep!” 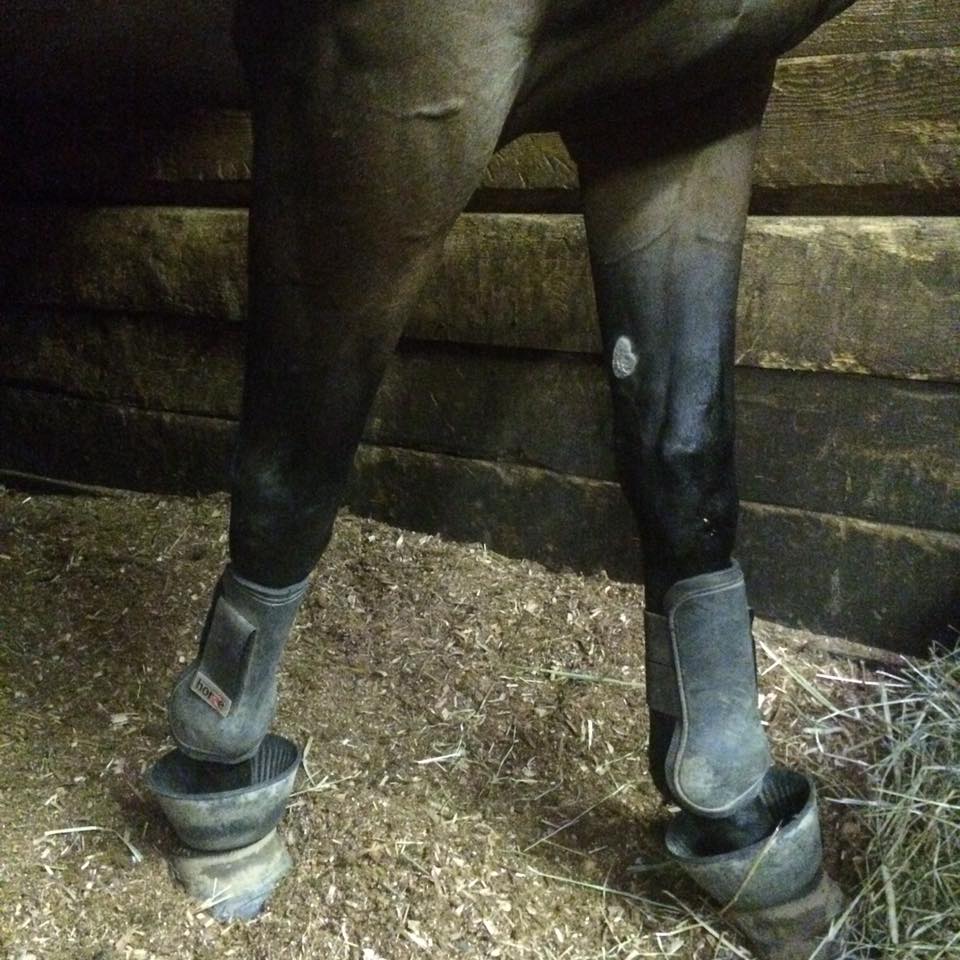 Photo courtesy of Emily Dengler and her blog, “Oh No There’s Flowers”

And while Mollie says he may not know much about horses (or their sneaky ways) she also says that “He certainly loves them and tries to help whenever he can!” 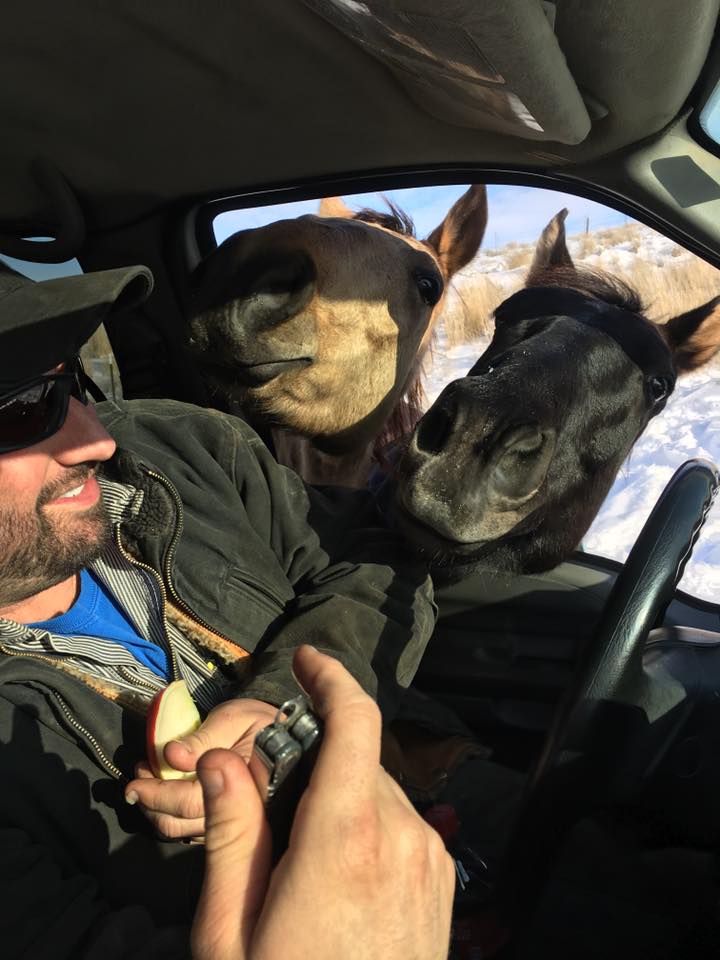 “He was working in the barn when I heard him say, ‘What are you doing? Stop that. Don’t touch me!'”

But Val also says, “for the record, he is a wonderful horse show spouse, turns my boys out every morning since I leave for work at 4:30AM.” 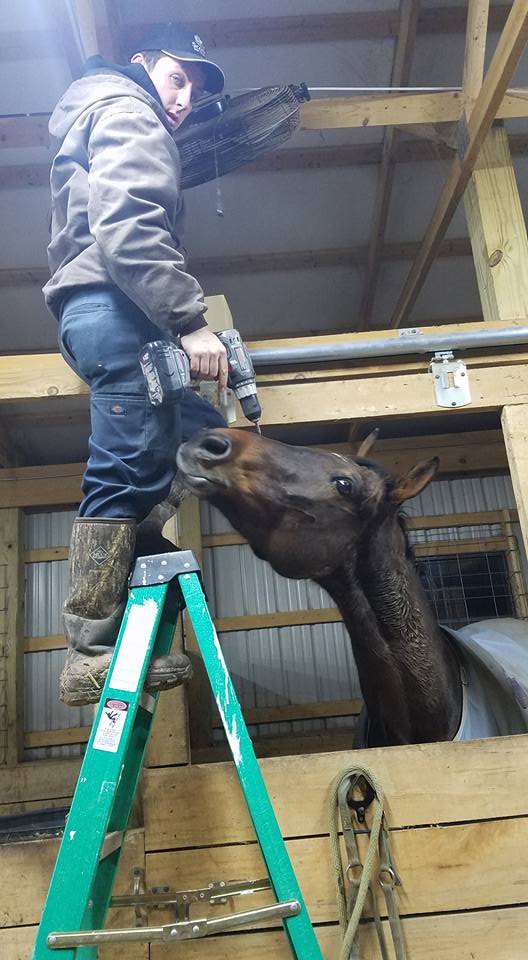 “He said he wanted to ‘get it out of her eyes.’ He won’t touch her again!”

Equine hairstylist may not be the next thing on this horse show husband’s resume, but he has a ton of other admirable qualities! “He is the best. He built the horse barn for me and took up riding when he can. He helps with farm work on the weekends and supports my habit!” 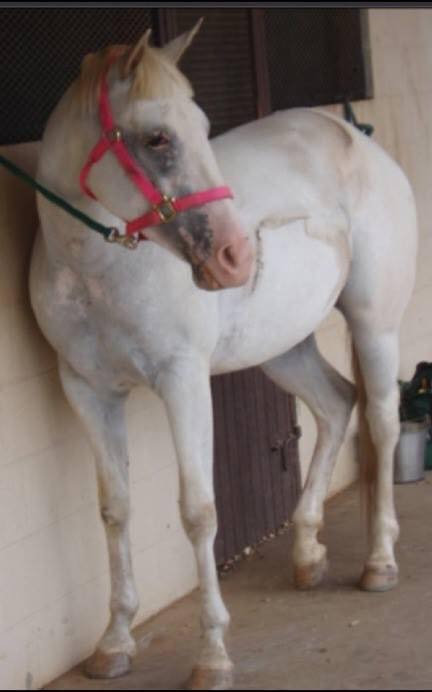 “When your husband says he will pull the mane…”

And all though Ashley’s husband may never become a four star groom, she couldn’t be more appreciative of all that he does to support her. “From putting up fences, to going to horse shows, to staying in the barn in the freezing cold for 6 hours with the vet for an injury, he is just so supportive!” 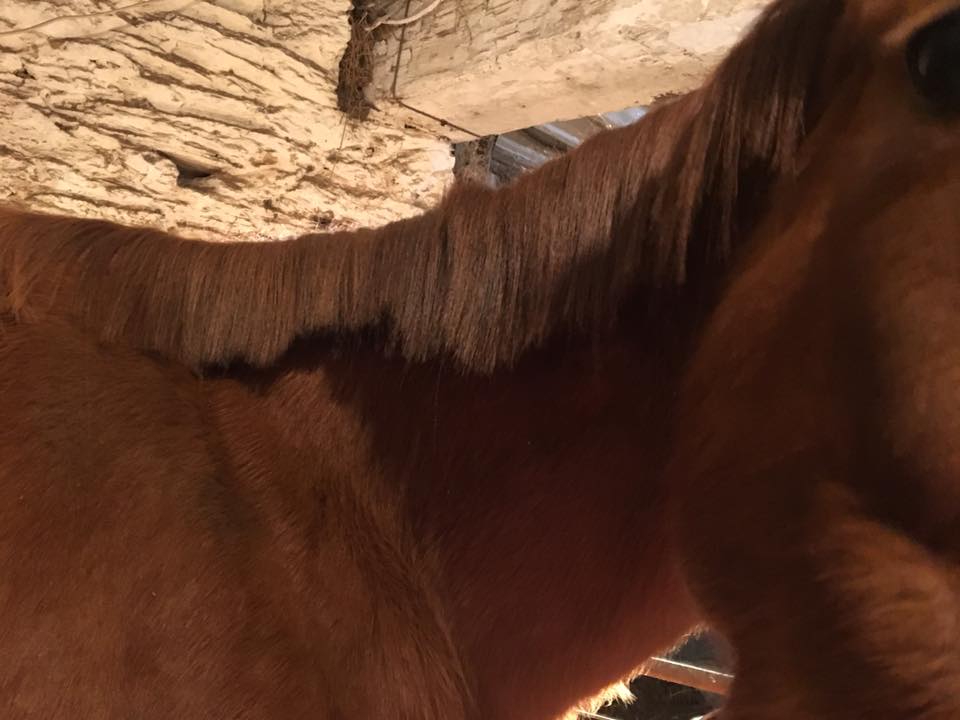 “I have continually told my boyfriend not to feed my horse treats until she’s done something good because she tends to get a little….personal. He didn’t get it until last week…”

Despite the sudden display of affection from Scot’s horse, his horse show significant other is always by his side. “I am so grateful for his support. I have some pretty big show goals over the next two years and he is genuinely excited to follow along with the process! He understands the time commitment of owning a true sport horse and loves her just as much as I do.” 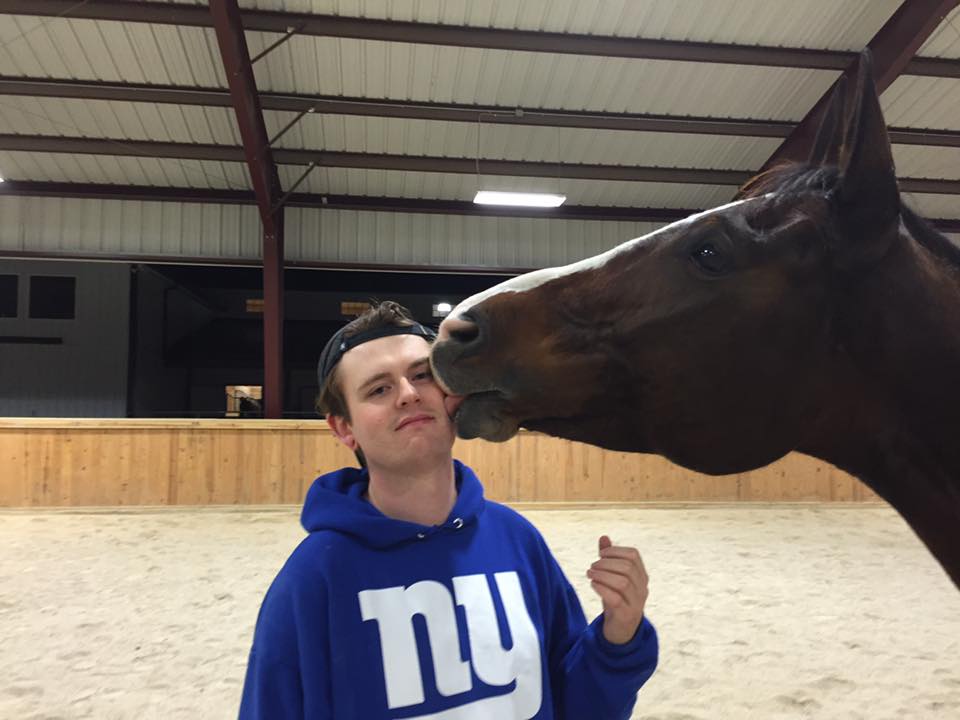 “My boyfriend swore he knew it was backwards but he ‘just wanted to get it up there.'”

Lauren says, even though he swears up and down he knew this was wrong when he did it, he still tries his hardest. “While she will forever make fun of him for the one time he put my saddle pad on backwards, he’s been a huge help with my horse and I can’t thank him enough for loving my silly creature as much as I do!” 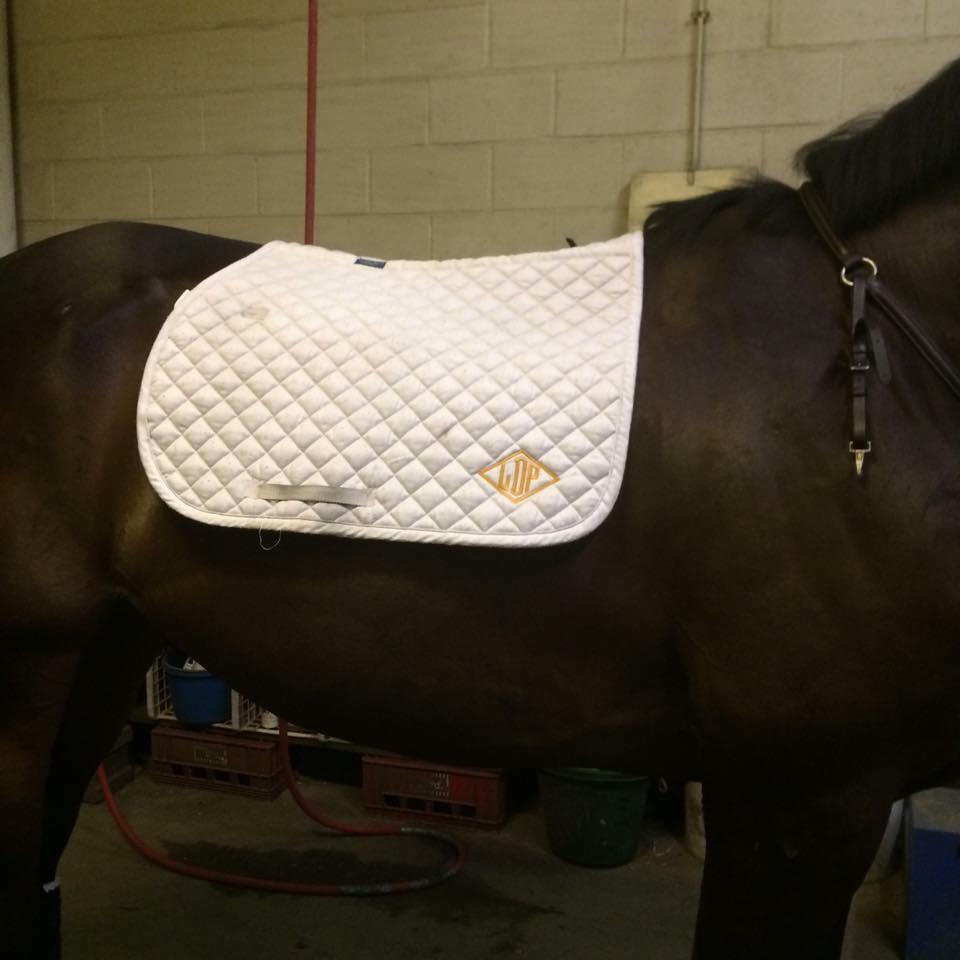 “My husband holding what he calls the ‘horse leash.’ Notice that he is holding the very last three inches of the lead rope…”

When talking about her horse show husband, Jayme admits he may not know horses, but he gets it. “Many people don’t understand our obsession with horses, but he does and he supports it. I am truly grateful for that.” 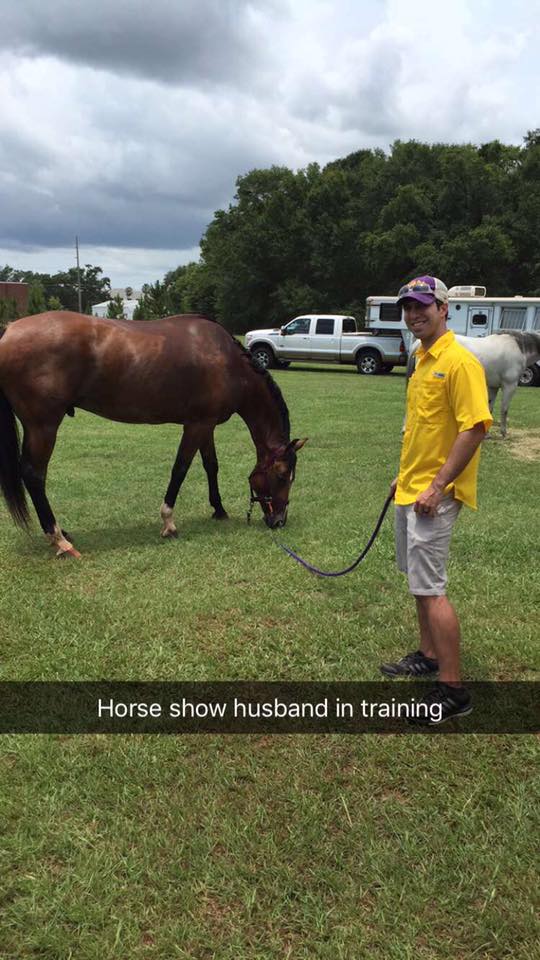 In this instance, the husband (Justin) and the horse (Declan) have a special relationship. Declan was shared between Margreta and Justin, and was Justin’s first horse. “There will always be a soft spot in Justin’s heart for his partner in crime, Declan.” 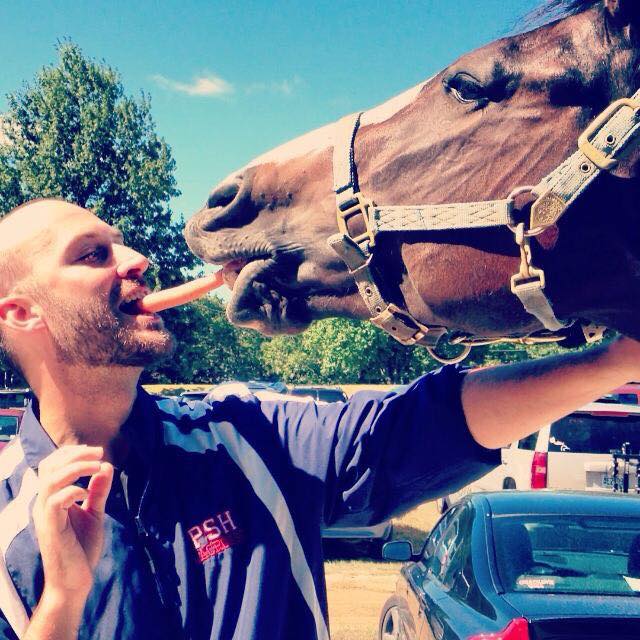 “No matter how many times I told him, he refused to listen….so she ate the whole time and Lord knows how that saddle/pad stayed on. He had to tack her up himself. He said he had ‘seen me saddle up a horse and knows how to tighten the band’….(he meant girth).”

And while it might not always be right, he always tries! “No one else has ever tried before. He may put the halter on sideways or bring me bell boots when I ask for shipping boots, but he’s there and trying and still hugs me even when I’m covered in green goo and smell like a stable.” 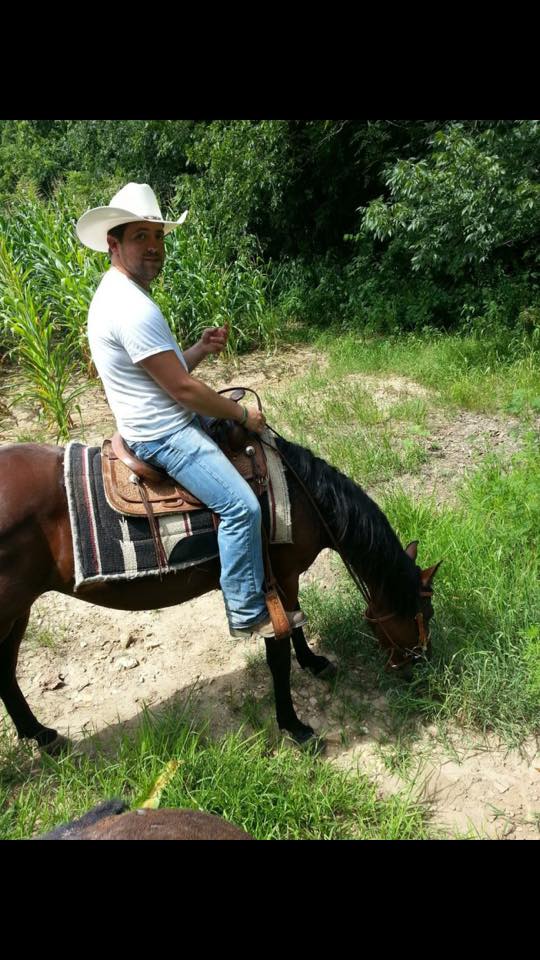 Horse show significant others, we swear to be patient and we know that nailing down all of the details of horse life can be hard. I think it is safe to say that despite your “oops” moments, not a moment goes by that we are not grateful for your support and determination! You keep us on our toes and keep the laughter rolling. But most of all, you make us smile.