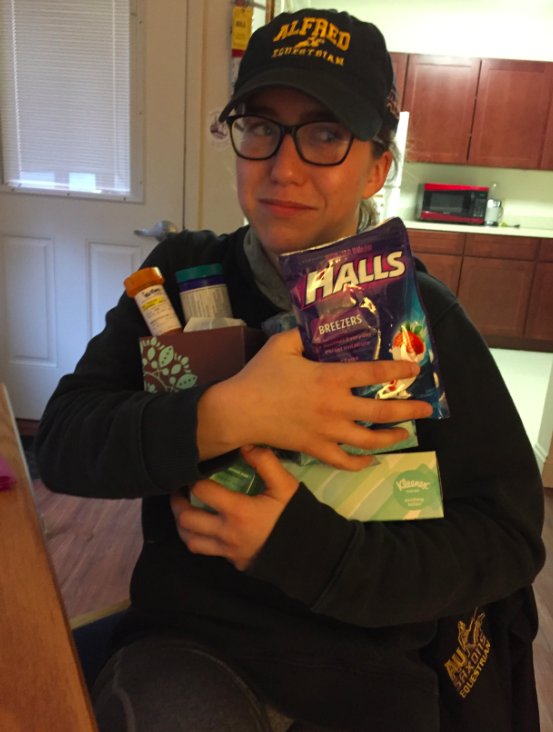 Because horse girls bring everything around to horses, Haley compares her first week of classes while suffering from a terrible cold to a really bad horse show.

All the materials for going back to class…check. Photo by Ellie Woznica,

If the first week of classes after a long break were a horse show, it would not be a very successful one for me. Having returned to Alfred with strep throat, pinkeye in both eyes, and a cold, I missed the whole first day of classes, and remain without most of my textbooks because the bookstore has to order them.

It would be the type of horse show where you wake up late with a headache and have to skip breakfast, then trudge out to find your horse has torn his sleazy and blanket off to marinate in his own pee overnight. Then he doesn’t want to load, and when you finally get him on the trailer you are either very low on gas or have a deflating tire. Since you’re already late, you take a chance and somehow make it to the horse show, barely, and it’s raining when you arrive.

Your trainer sees you, tired and make-up-less, and doesn’t recognize you at first. “Wow, you do look sick,” she’ll say (this is a direct quote from one of my professors this week, whose classes I have taken before, when she saw me in class yesterday — and this after she consulted the attendance sheet because I looked so unlike myself that she did not know who I was at first). You tack your horse, realize you forgot your own saddle, borrow someone else’s oddly-fitting one, and make your way to the warm-up pen. You find out that both you and your horse have forgotten how to ride in the twenty hours since your last lesson.

You go into the show pen with stirrups that are probably uneven and your shirt half-untucked. Your horse’s tail never quite came clean. Staying on the rail, you squeak through without being noticed — you don’t place, but neither do you embarrass yourself or your trainer too badly. On your way out of the ring, you notice that you are missing one glove. How anyone ever let you venture off into the horse showing world, you’re not sure. Your horse is rolling his eyes at you.

After a few more laps around the warm-up pen and a brief stop for a greasy concession stand breakfast, you think maybe you remember how to do this. By this point, the rain has slowed to a sprinkle — you and your horse are both soaked, but at least the stain in his tail has mostly washed out. For the second class, you’re still apprehensive but at least you have both gloves on and have tucked your shirt back in. You’re confident that you can make it through the class and do all the maneuvers (more or less) without running over the judge, falling off, or crying, and sometimes that’s enough.

This first week of classes has gone about as well as the horse show of my nightmares, but it’s the end of the week now, I’m not yet failing any classes, the antibiotics are kicking in, and my eyes look less rabid every day. For this week, I’ll count that as a success.