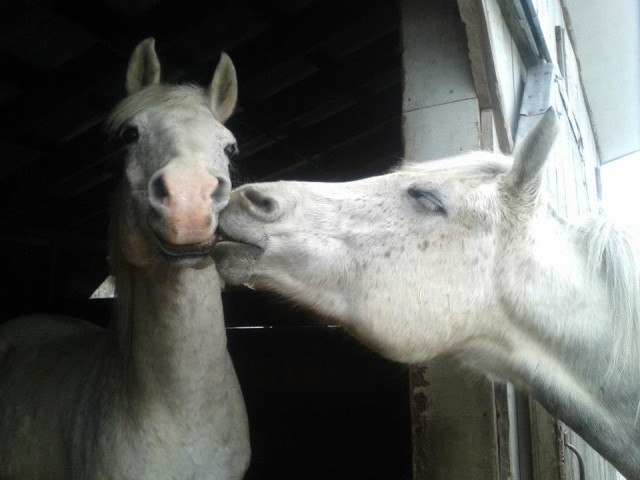 Mare with foal born during a seizure of a well-bred herd. Owner was convicted and knew of the neglect but refused help multiple times. Photo courtesy of Arabian Rescue Mission.

Arabian Rescue Mission is a 501(c)(3) non-profit horse rescue with a farm based in New Jersey as well as a unique nation-wide mission to help facilitate the safe adoptions of large herds. Founder Terry Figueroa specializes in the Arabian breed having been a life-long enthusiast and owner. We spoke with Terry to learn more about the work that she does.

How did you get started with Arabian Rescue Mission?

I sought a way to give back to the Arabian horse. I was a very small-time breeder for many years — I’m talking 6 foals in 20 years, very small time. I showed my stallion and I had fun with him and just enjoyed the breed.

I started rescue by trying to help a mare named Pru. I found out as I worked to help her that it was her entire herd that was in need. That was in 2003 and I was privately funded at that point; it was just me. On my days off I would fundraise.

In 2009 into 2010, I got involved with the rescue and placement of an entire herd. At that point I realized I had found my niche in working to help large groups of horses like that.

Charlie, our blind 39yr old resident has been with us since 2003. Photo courtesy of Arabian Rescue Mission.

Describe that process of helping an entire herd or farm.

What I’m seeing happen in the Arabian horse world in particular is that the breeders are aging. Some of these lifelong breeders are in their 80s or 90s, their health is declining, their kids don’t want the farm and gradually they can’t care for their horses any longer. Care of the horses declines and then they’re in trouble.

I go to these farms in need when someone reaches out for help. I’ll fundraise at a local level within their community, get the word out to local media, start to advertise that the horses will be available for adoption and I don’t leave until the last horse is adopted. Typically we work right out of the farm in need, but sometimes in unique circumstances we move all of the horses to a local fairgrounds where they stay until they find homes.

What I’ve discovered in this process, however, is that people are less likely to donate their funds to help a herd in need. When 50-plus horses are still living relatively safe at home, there’s no sense of urgency.

But we make it work — when I come to town, I have local volunteers who help me out, processing adoption forms, communicating with our home office, doing farm visits and reference checks. I’m not just handing out horses to the first person who shows up with a trailer; it’s my responsibility to ensure that these horses are going to safe, caring homes. Every horse that gets adopted is sent with an individualized instruction sheet, helping the new owners make the correct choices for feeding the horse safely and bringing a poor body condition up to a better one.

The 2010 Ohio herd placement was so widely publicized that I began getting more and more calls to help with herds. I’ve gone all over the country. I’ve been able to build a network now in every state that I’ve been in, meeting people and bringing them together. I don’t always have to travel; sometimes I can process the applications and approve homes based on local volunteer support.

Bella’s mom was rescued from a kill pen while she was pregnant. Mom didn’t make it but Bella is now adopted in a great home. Photo courtesy of Arabian Rescue Mission.

Do you maintain a more “typical” rescue at home too?

Yes. We have a few owner surrenders or slaughter auction rescues at home as well. I have a few horses there that will never leave the farm.

If there was one thing you wish people knew about the work that you did, what would it be?

Facebook is a great tool and a great resource… but it also opens you up to a lot of crazy people. If you make one mistake, you live with that mistake for the rest of your life — and I’ve made mistakes. Social media is full of people making snap judgments on situations they’ve never been in.

It’s so easy to look at a photo of a thin horse and rail on the owner. No one intentionally wakes up and says “I think I’ll starve my horses today.” I’ve met these people — they are often sick, suffering from dementia, in over their heads and they need help, not judgment. One photo should not vilify a person for life. That said, sometimes prosecution is necessary.

Huck (on the right) was re-homed because his owner could no longer keep him. Photo courtesy of Arabian Rescue Mission.