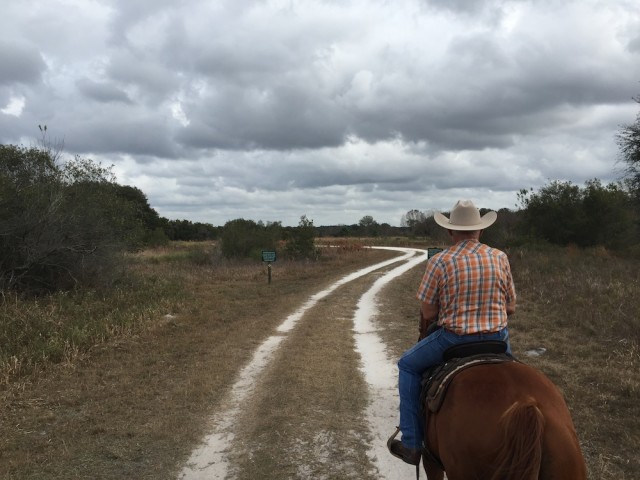 Collegiate blogger Haley Ruffner gets her first taste of how some equestrians spend their winters in Florida, and she didn’t want to come home!

When my coach and mentor Harry Hurd invited me to go to Florida with him over winter break, I couldn’t say yes fast enough. We drove down two days after Christmas. Twenty-one hours, half an audiobook and several tanks of fuel later, we arrived at the Florida Hurd residence, a house near Ocala surrounded by towering yellow pine trees and live oaks draped in Spanish moss. Harry’s travel itinerary had included all of two things: we were going to replace the hurricane-torn coverall roof on the barn and visit tack stores in Ocala. Other than that, I wasn’t entirely sure what to expect during our two-week long stay.

We spent a few days in various stores, from a farrier’s outlet to a huge Boot Barn to a consignment store, where I stocked up on reining and ranch horse books. The barn roof came in towards the end of our stay, but its measurements were incorrect and it had to be returned.

One of the first mornings after breakfast (at which Harry tried and failed to convince our waiter that I was forty-two years old), we turned left out of the parking lot instead of taking the right turn towards home. “Where are we going now?” I asked. “For a drive,” he said, smiling. And so we toured the farm country, Harry pointing out where housing developments had taken over what he once knew as vast pastureland, places he’d visited with old friends, estates where the fencing alone cost more than some people make in a lifetime. I wished for an extra set of eyes that day — later, my neck was sore from craning it every which way to take in all the sights. We drove past pawn shops, farm stands selling strawberries and oranges, swathes of tangled untouched forest, and pastures full of everything from Brahma cattle to emus.

Later in the week, we borrowed horses from a friend of Harry’s and went trail riding. We wandered along sandy trails around boughs of yellow pine, their trunks blackened along the bottom from that summer’s controlled burn. Harry pointed out holes in the ground dug by wild hogs, deer and coyote tracks, and places where hoofprints overlapped our own (we were never lost, just confused). Two hours later, guided by the sun and Google Maps on my phone, we made it back to the trailer. We both dreaded returning home to icy winds and slick snowy rides — Florida trails, stretching from the Gulf to the Atlantic, could keep me occupied for at least the entire winter.

It also became clear to me during our trip that Harry just as famous (or infamous?) in Florida as he is at home. We went to a reined cowhorse show in Sarasota, where we didn’t even make it up the driveway before someone stopped us to say hello to Harry. At a cutting in Lady Lake, Harry could name almost every rider in attendance as though he’d been managing that show circuit himself. We went to a cattle sale, and he guessed the selling price before the bidding started and was correct within a few cents every time. The auctioneer, an old friend of Harry’s, paused in his announcing to say goodbye when we left.

We visited several of Harry’s friends, most of whom I had heard stories about but never met. In turn, they told me stories about things they’d done with Harry over the years. One woman, who once worked for him and started the entire riding program at Alfred, told of a horse that kicked its way out of the trailer and galloped down the side of the highway with Harry’s arms around its neck, half-running and half being dragged along. I met people who sold and bought horses with Harry, shown together, got into trouble together.

After one such visit, Harry said that he worried he was boring me, visiting people I didn’t know. I assured him otherwise — I loved listening to his stories, all the years of cowboy wisdom and jokes and experience, meeting the people he so often talked about. The storyteller and writer in me awoke after a long winter break nap. One of the best ways to find a lifetime’s worth of good stories is by walking in the footsteps of an old cowboy, whether you’re horseback or at a cattle sale or with his friends.