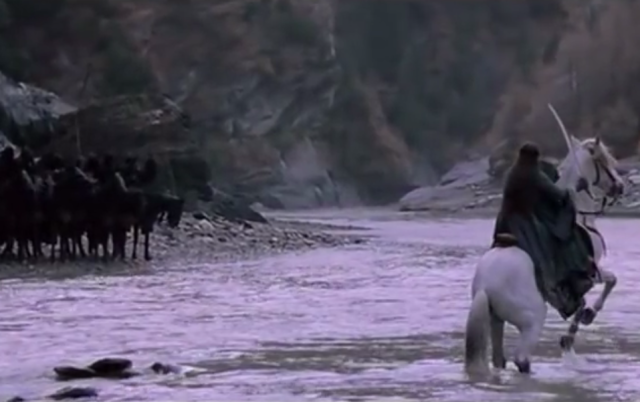 “Heels DOWN.” Yep, poking fun at movie and television horse scenes is a rite of passage for equestrians, but what if those scenes really were true to life?

I mean, other than this scene, because this is still one of the more bad-ass things to happen on the big screen. Screen shot.

I really try not to be the judgmental person sitting on the couch during movies or television shows saying “oooh… buddy… your equitation.” After all, there are plenty of inaccuracies and things that every film or show could do better in all fields, not just horseback riding. On the other hand, it’s fun to imagine what movies or TV would be like if horse scenes were like the real world.

For one thing, it would be a lot quieter. I know this is hard for soundtrack producers to imagine, but I’ve gone an entire week of barn chores without hearing my horses whinny, grumble, groan or mutter like your equine movie stars seem to find so necessary. Seriously, the only real horse I’ve met that comes even close to producing big-screen horse noises was a mustang mare on the ranch where I used to work who would grumble to herself in the back of the line. Most horses do NOT make those noises. It’s like if the horses on film aren’t constantly making horse noises, we’ll forget what they are. Vikings, we’re looking at you.

Nobody is going to ride anywhere without their buddy offering just a suggestion or two along the way. Like, let’s imagine that beautiful money shot from the first episode of Westworld where Teddy and Dolores go galloping through the sagebrush under the red-rock mountains, and as they pull up to a halt on a little rise Dolores leans over and says “Hey, Teddy, I notice your horse is tossing his head a little; maybe you should consider using a milder bit because I hear that Tom Thumbs can nutcracker the jaw a little and sometimes it looks like maybe you’re just a little too heavy on the reins.”

Urgent messages from one end of the kingdom to the other are going to take a little longer. Because it’s important to have a good, safe warm-up with plenty of stretching before strenuous exercise, such as galloping 90 miles over rough ground. Sustained galloping isn’t terribly healthy for long-term soundness, either, so you’ll want to add in plenty of slow work in between sprints. And of course it’s terribly dangerous to gallop across unfamiliar terrain in case you step in a hole. Look, if you want that message to get there in time, send a raven.

Surprise — that big horse show class the main character was hoping to win in order to save her riding stable/horse rescue/pay her aging trainer’s medical bills does NOT offer $10,000 in prizes. Nothing makes me laugh harder in feel-good family movies than when the neighborhood saddle club is offering a big cash prize for the 2′ hunters. Is it a nice idea? Yes. Does it teach kids that anything is possible if they work hard towards their goal? Yes. Is it remotely accurate? *holds up 50-cent ribbon*

Okay, let’s say they DO manage to find a class in which they might really win big. 9 out of 10 chances say the horse is lame that morning. Because that’s what horses do. Big show tomorrow? Stone bruise. Biggest race of my life? Slight fever. Charging into the fateful battle in which I represent all the forces of good in this world trying to conquer an immeasurable evil? Abscess.

Saving the fate of the free world is going great until they get to the river crossing they haven’t practiced in awhile. Oh HECK no. I can’t see the bottom, therefore this is a bottomless sea that is going to swallow me whole and I am not crossing it. You can practice with the tarp and your magic wand of choice back in Rivendell as much as you like, lady, but this river is whole ‘nother story.

Before the epic battle or flight scene, the main character’s mother comes running out of the fortress or castle. “DON’T FORGET TO PUT ON YOUR RIDING HELMET!”

Hey, that’s why they’re the movies — they don’t have to be realistic for us to love ’em. Go riding!