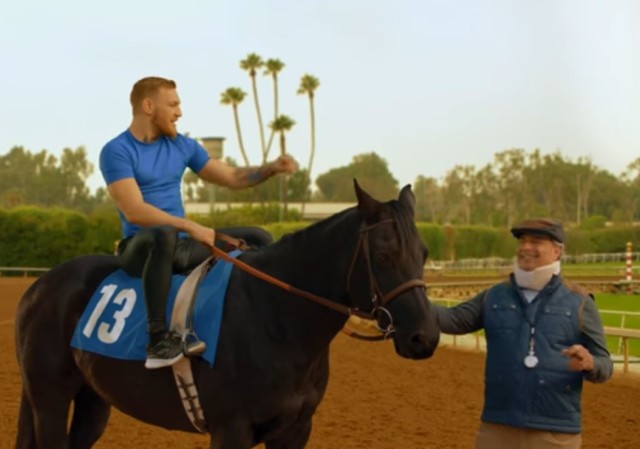 I’ve seen it three times, and I’m still not sure what I just watched.

The Pegasus World Cup Invitational does everything just a wee bit differently than most of the other horse races in the world. A little less stuffy dudes in hunt caps blowing horns, and a little more shirtless MMA fighters flinging insults so you’ll enter their $1 million contest.

The Pegasus World Cup (this year being held at Gulf Stream Park in Florida) features an eye-popping, jaw dropping purse of TWELVE. MILLION. DOLLARS. On a day where they will have already shelled out more than a million dollars in purse money for the earlier races. The race is shaping up to the ultimate rematch between our beloved California Chrome and the punk Arrogate; racing fans will recall that Arrogate nipped right past Chrome to steal the Breeders’ Cup Classic last fall and Team Chrome has a score to settle now.

But horses, horses, winning, fast, BLAH BLAH BLAH. Let’s get back to that whole bit about Conor McGregor with his shirt off, shall we? Conor has apparently agreed to be the “thirteenth jockey” in the Pegasus World Cup, and this is a promotion we’re all to happy to get on board with here at Horse Nation, where things don’t need to make sense to be wonderful. For example, the king of rye Jewish comedy and my personal hero, Jon Lovitz, playing Conor’s coach. Do jockeys have coaches? Is that even a thing? I don’t care if it is. This is magic.

The video is a promo for the Pegasus World Cup’s spectator sweepstakes prize, which you can enter here. (And when you do, you’ll be told “Try entering the contest and you’ll have a shot of winning something for once in your bum life” by a shirtless Conor which, once again, I think we’ve determined is a delightful experience no matter the jabs.)

Prizes include everything from a pair of Elby Bikes to Longines watches to the motherload grand prize, one million punches to the face. Just kidding. It’s a million dollars. A MILLION DOLLARS, GUYS. Pegasus World Cup is not paying me to say any of this, I’m just trying to let you know not to squander a million dollar opportunity here. Horse bills and all that. I get it.

The Pegasus World Cup will be aired on NBCSports.com on January 28th and the NBC Sports App.