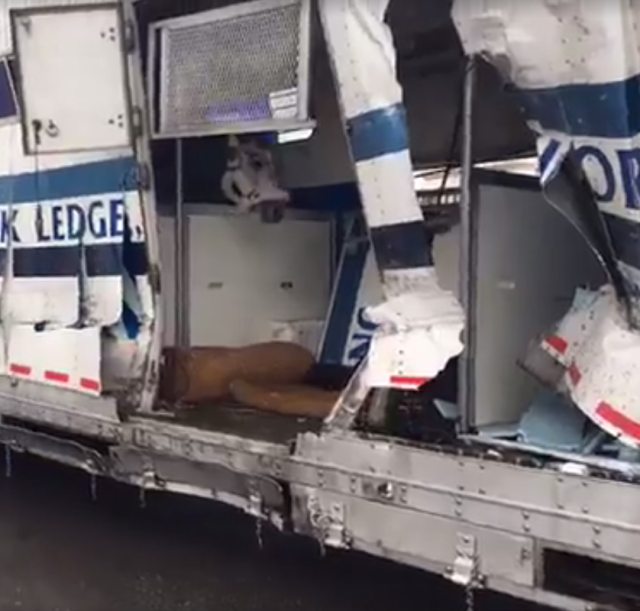 One horse was seriously injured but is expected to recover.

This story is courtesy of our sister site Jumper Nation.

Three horses were injured — one seriously — when a Brook Ledge transit truck heading from Seattle to Thermal was sideswiped in a traffic accident Wednesday afternoon. The outer shell of the Brook Ledge trailer was crumpled and nearly removed altogether at the point of impact. Incredibly, no people were hurt in the incident.

The accident occurred near Redlands, California when a different tractor trailer lost control on the road, bounced into the cement median of the freeway, and ricocheted off the Brook Ledge trailer. There were seven horses in the trailer altogether at the time of the accident.

Redlands Animal Control, High Patrol, and Police were on the scene in minutes as well as local veterinarians. One horse was tranquilized to prevent further injury as they extricated him, but all the horses were able to walk out of the trailer on their own when a replacement vehicle arrived.

Six of the seven horses will continue their journey to HITS Coachella where some will continue to seek treatment for their injuries. The horse in serious but stable condition will continue to be treated in Redlands for the time being. Reports circulating that one horse has been euthanized are believed to be false.

The names of the owners/trainers has not been released. We will continue to update this story if more information becomes available. We applaud the Brook Ledge driver for his calm command of the road in an imaginably terrifying situation and preventing further accident or injury.

Photos of the incident are available here.