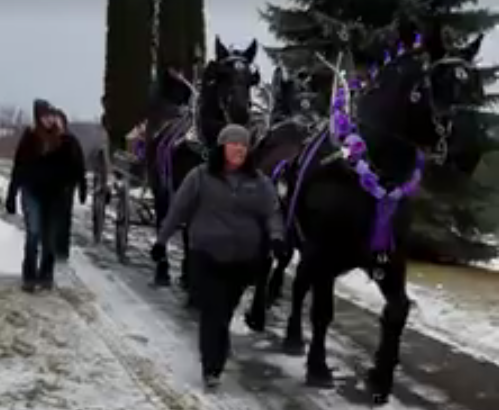 The draft horse world lost a rising star on January 3, 2017 when 16-year-old Jodi Hinz lost her life. Her Percherons brought her to her final resting place in a touching tribute.

Jodeen “Jodi” Hinz of Sheboygan, Wisconsin tragically passed away on January 3, 2017 on her way to school when her car hit a patch of black ice. Jodi had been a lifelong equestrian both in the saddle and at the lines, particularly talented in the draft horse arena. She was named Overall Youth Exhibitor of her age group at the national level with her family’s Percherons, and also showed to great success at the 2014 World Percheron Congress in Massachusetts. Her loss was keenly felt not only by her parents Kelvin and Jackie Hinz but by the entire draft horse community.

Jodi Hinz was laid to rest on Monday, January 9, with her family’s team of Percherons bringing her casket to her grave. Her own horse was in the lead of the unicorn hitch.

The procession was a moving tribute to a life ended too soon. We at Horse Nation send our condolences to the Hinz family and all those that knew Jodi, as well as the horse community for another rising star taken before her time.

Draft horse enthusiasts and horse lovers are honoring Jodi’s memory through the tags #driveforjodi and #rideforjodi on social media. In times of tragedy, we remember how blessed we are to do what we love, and encourage our readers to use these tags in memory of a fellow equestrian and horse lover.