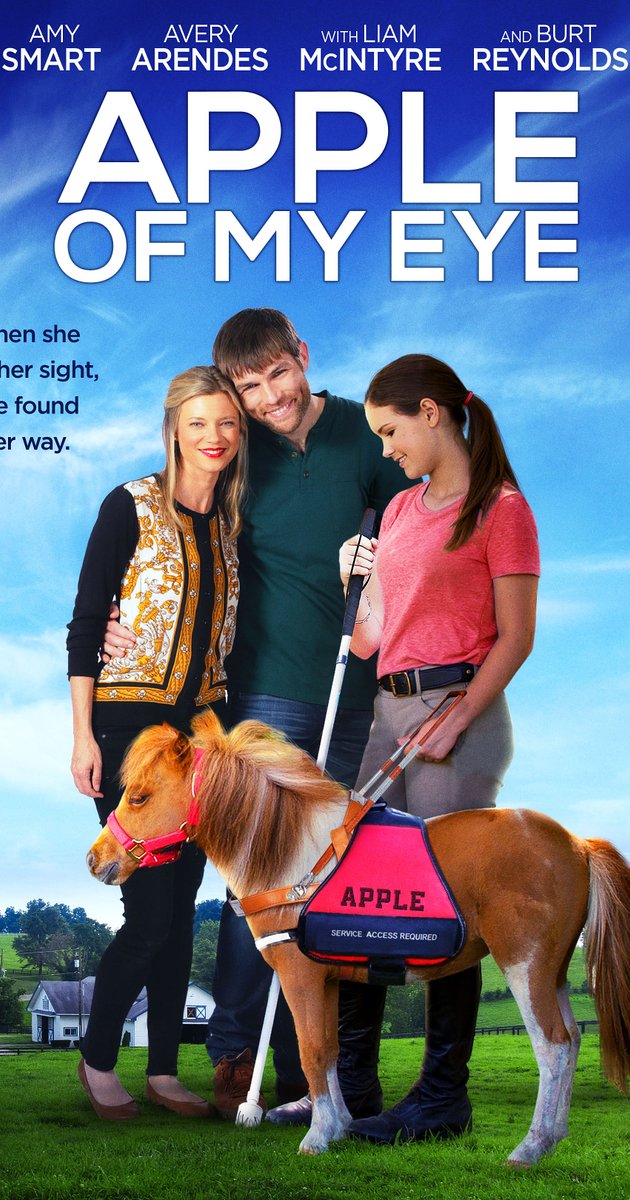 Amanda checks out an inspiring story about a girl and her mini horse.

Apple of My Eye (2017) is the story of teenager Bailey who tragically loses her sight in a riding accident. After seeing her struggle to adjust, a guide dog trainer introduces Bailey to the absolutely adorable Apple, a guide pony.

For a straight-to-DVD feature, I’ll admit I was surprised by the production value and quality of actors involved. The young actress playing Bailey, Avery Arendes, looked age appropriate for the character — more of a problem than you would think in family films — and did a fantastic job “going blind.” Her parents are played by Amy Smart and Liam McIntyre, an Australian actor known for his lead role in Starz’ Spartacus. I don’t normally watch PG-rated family films looking to scope out guys, but I have to admit I was like…

If you like the pairing of Liam McIntyre and Avery Arendes — and they really do have great chemistry — then you should also check out Albion: The Enchanted Stallion.

Also, Burt Reynolds is involved. Love me some Burt.

Bailey’s debilitating condition is handled with sensitivity, but not melodrama. After the initial shock of her diagnosis the whole film is infused with optimism and a good bit of humor via “Sebastian,” a character with total blindness, played by Jack Griffo.

Sebastian: Bailey, nice to meet you and I’m sure I won’t be seeing you around.

And then there’s Apple. This little mare is absolutely adorable. If you don’t believe me, just check out her Facebook page.

Bottom Line: Is this the most thrilling movie in existence? No. Is it a movie you can put in the DVD player and not worry about the age of any viewers? Yes. My eight-year-old daughter watched the movie twice and gave it two thumbs up. The film is educational and cute with good acting and only one pop music montage … even that one’s not that annoying.

And did I mention Liam McIntyre?

Source: Oh No They Didn’t

I give Apple of My Eye 3 Golden Horseshoes.

Apple of My Eye released today, January 10th, and is available for DVD purchase or digital download. Click here to view on Amazon.