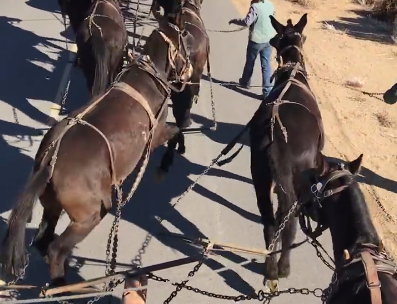 The famous 20-mule team marched in the Rose Parade — after performing the iconic “Dance of the Mules” or jump over the logging chain while hitched. Get the details here!

The Borax 20-Mule Team is ranked among the famous large hitches in American lore, with its likeness depicted on marketing materials, commercials and Borax packaging itself. While legends may differ somewhat, Texas Escapes online magazine traces the origin of the 20-mule team to 1886, when a teamster purchased a matched 12-mule hitch in Death Valley and then added eight more mules.

Since no wagon tongue in the world would be long enough (nor safe nor practical!) the mule pairs were hooked to the load with a heavy logging chain. On straight roads, the mules would carry along just fine; on a curve, however, some pairs would need to jump over the chain as the entire team wound its way back and forth.

The 20-mule team still uses this old skill, even if the team is only used for parade purposes. Watch what the “dance of the mules” looks like from the driver’s bench as the team trains for the Rose Parade!

What a well-broke team! The mules were reportedly a big hit in the Rose Parade — shout out in the comments section if you caught a glimpse!